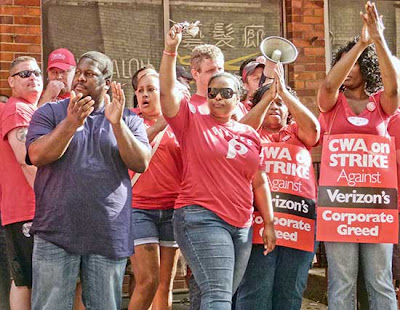 In the largest U.S. strike in four years, 45,000 union members took to the picket lines from Massachusetts to Virginia on Aug. 7 after their contract with Verizon Communications expired. The courageous strikers, who belong to the Communication Workers union and the International Brotherhood of Electrical Workers, refuse to go back to work until they have a decent contract.

Ninety-one percent of the 35,000 CWA members and a vast majority of the 10,000 IBEW members voted to strike in late July. They took this action after Verizon refused to back down on nearly 100 concessions it has been demanding from its workforce since June 22, when bargaining began.

The CWA website explains, “CWA and IBEW have decided to take the unprecedented step of striking until Verizon stops its Wisconsin-style tactics and starts bargaining seriously,” referring to how Wisconsin officials pushed through union-busting, anti-worker laws.

“Even at the 11th hour as contracts were set to expire, Verizon continues to seek to strip away 50 years of collective bargaining gains. Following the game plan of Wisconsin, Verizon is trying to destroy the collective bargaining process by refusing to engage seriously on the issues,” said Candice Johnson, CWA communications director.

IBEW International President Edwin D. Hill stressed, “[Verizon] turned their backs on any attempts to reach a reasonable settlement. We cannot stand by while one of the richest, most successful corporations in the world joins the race to decimate the ‘middle class’ of this country.” He continued, “[A]t this point, we had no choice.”

Verizon officials insist on demands that would devastate the workers’ standard of living, eliminate hard-won benefits and override their union rights. They seek to end all job security provisions, eliminate disability benefits for employees injured at work and take away paid holidays, such as Martin Luther King Jr. Day. Sick days would be limited to five a year for current employees and would end for new hires. Regular raises would be eliminated. Pensions would be frozen for current workers and nonexistent for future employees.

Due to past militant struggles, the workers don’t pay health care premiums. The company’s aim is to institute a health plan that would cost the workers and retirees thousands of dollars — despite earlier contractual guarantees made to them. The company also maintains its insistence on outsourcing work to low-wage, non-union contractors here and abroad.

Verizon has not moved one iota from its intransigent stance and has cancelled all negotiating sessions since midnight on Aug. 6 when the contract expired.

The company’s demands amount to $1 billion per year in concessions, which is $20,000 per worker.

The company is promoting the spin, as Hill points out, “that it needs to make itself competitive in the changing telecommunications industry.” In other words, the workers must make huge concessions so that Verizon’s labor costs equal those of non-union workers in the company and in the industry. This is a convenient cover for the corporation’s mega-profit-making and exploitation of its workers — whose labor has created all of Verizon’s wealth.

The strikers are in the unionized landline division of Verizon’s workforce, and they have lost one-half of their members in the last 10 years. The workers in the other main division — Verizon Wireless — are not unionized, except for 70 New York City CWA wireless technicians, who are also on strike. Most of the wireless employees have no union because the company fiercely fought every one of their organizing drives, in violation of a “neutrality” agreement signed with the unions in 2000.

While demanding these drastic cutbacks, Verizon had revenue of more than $100 billion in the last year and is making record profits — $20 billion over the last four years and more than $6.9 billion in the first half of 2011. The company paid its top five executives $258 million in the same period. Its chairperson, Ivan Seidenberg, received 300 times the average salary earned by workers.

Labor movement needs to get behind this strike

This strike is a spark that could embolden the working class and the labor movement at a time when the capitalist class is on a rampage to push back workers’ gains — trying to take back everything that unionized workers have won — and to decimate their collective bargaining rights.

The ferocity with which Verizon is attacking the workers must be met by a mobilization of the labor movement. This strike is crucial in the unfolding class struggle, one that critically needs the active support of the entire labor movement — in both the public and private sectors.

CWA and IBEW members have vowed to stand up to this vast global monolith and fight back against an assault on their rights, as their public sector union brothers and sisters did in Wisconsin.

It would bolster this strike if public sector workers — who are under attack by reactionary anti-union forces — came out to support the Verizon workers.

In the current atmosphere of outright corporate hostility to labor, when the super-rich corporate owners and their governmental representatives have unleashed a war on public and private sector workers and their unions, unity among all workers in all industries and unions is critically needed.

The Verizon strikers are bravely standing up for all workers. Their principled actions and working-class solidarity are borne out by IBEW President Hill, who asserted, “This group of Verizon workers is prepared to make the strongest possible stand not just for their own contract but for workers everywhere by saying NO to the race to the bottom.”

Repair technicians, FIOS installers and call center workers are picketing throughout the Northeast and Mid-Atlantic regions. They are walking picket lines and rallying at more than 100 Verizon locations in the New York/New Jersey area. Workers World newspaper encourages its readers and all those in the progressive movement to support the strike and join the picket lines. For locations, see cwa-union.org and ibew.org
at 2:05 AM