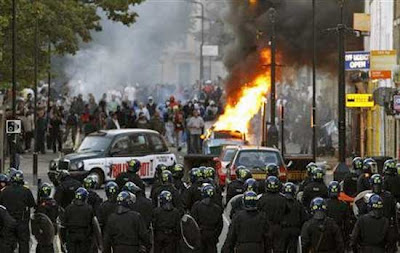 In the past year the British government has announced and implemented huge cuts in education and social service programs in the face of growing unemployment and poverty. Now Black and working-class youth are responding with direct action and mass rebellion.

Beginning on Aug. 6 in Tottenham, North London, thousands of youth demonstrated, attacked police cars, buses and businesses in response to the police’s unprovoked killing of Mark Duggan, a 29-year-old Black man and father of four. Duggan was travelling in a vehicle on Aug. 4 when he was pulled over by police and shot dead.

Outrage spread throughout the Tottenham community. Residents demonstrated outside the police station on Aug. 6. It was reported that soon after the protest, several youth hotwired two police vehicles and drove them to the center of the nearby business district, where they were set afire.

Later, according to media reports, hundreds of others began to pelt police, empty stores and eventually burn down numerous establishments in the area. News of the rebellion spread throughout the city and the world.

The next night, other sections of London and its suburbs erupted in similar unrest. In Brixton, Enfield, Chingford Mount-Waltham Forest, Dalston, Edmonton, Islington, Oxford Circus, Ponder’s End and Walthamstow, youth attacked the police and symbols of exploitation. In various areas affected by the rebellions, youth hit the Kingsland Shopping Center in Dalston, Curry’s, William Hill, Nandos, Morley’s Department Store and T-Mobile in Brixton along with Blockbusters, Vision Express, JD Sports and other businesses in Tottenham. (London Telegraph, Aug. 8)

During the following day in Hackney, youth clashed with riot police after taking over a lorry full of building materials that were used as defense against the cops. In Peckham and Lewisham, youth reportedly fought running battles with the police and at least one bus was set on fire.

Police escalated their patrols and aggressive tactics in response to the youth unrest. It was reported by Scotland Yard that more than 200 people had been arrested by Aug. 8.

The police and the media immediately began to portray Mark Duggan as a criminal and a gangster. He was blamed by the authorities for causing his own death by firing first at the cops. (Daily Mail, Aug. 8)

Duggan’s family said he was unarmed and that the killing was totally unjustified. Rather than accepting responsibility for Duggan’s death, police called those involved in the protests and rebellions “criminals” who now face arrest and prosecution.

Despite past rebellions, gov’t fails to address national question

Observers in London have compared these rebellions to those that swept the Black and Asian communities in England from the late 1970s through the mid-1980s. In 1981, rebellions swept Brixton and other sections of Greater London and spread to the rest of England.

In Tottenham in 1985, a rebellion erupted after a Black woman died during a police raid. A white police officer was later stabbed to death during the unrest, which lasted several days and resulted in significant property damage.

Since 1958 in Notting Hill, when white racist mobs invaded Black communities attacking homes and residents, the British government has failed to adequately address the national question. In recent years as the economic crisis of world capitalism has impacted urban areas throughout Europe, rebellions have re-emerged as a form of resistance and protest.

Faced with worsening unemployment and social conditions for the working class, mostly young people in the suburbs of France, where many African and Arab immigrants live, erupted in rebellion in 2005 and 2006 in response to police brutality and institutional racism.

In Britain there have been some cosmetic changes to the labor market since the rebellions of the 1980s, with more Black and Asian people in media and business. However, police brutality and misconduct remain a major source of complaints in the country’s urban areas.

The onslaught of the economic crisis of 2007-2008 has hit Britain hard, prompting the central bank and the government to shore up the financial sector. Meanwhile, the conservative-led government of David Cameron has mandated massive social service cuts. With dissatisfaction spreading among workers and youth, the situation is volatile.

Significance of the rebellions

Such rebellions could occur anywhere in the industrialized capitalist states. Rising unemployment and impoverishment of oppressed and working-class people provide fuel for social unrest. The regime implements its economic decisions without consulting working people and youth.

The growing agitation and unrest within the imperialist West are coupled with the rising tide of struggle, particularly in Africa and the Middle East. The U.S./NATO wars against Afghanistan and Libya have only provided more defeats for world imperialism in its desperate attempt to maintain its dominance over the majority of humanity.

Workers and the oppressed must strengthen the existing mass organizations and trade unions in their fight to end the system of exploitation and oppression. To many it is becoming quite obvious that capitalism and imperialism have nothing to offer working people and the nationally oppressed throughout the world.

People want and need jobs, incomes, health care, pensions, quality education and life without political and state repression. When these movements and organizations come together they can bring about major advances in the fight to end exploitation and oppression and to realize a socialist future for humanity.
at 2:07 AM