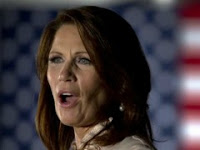 Minnesota Rep. Michele Bachmann (R) has already made one slavery-related gaffe during her presidential campaign, signing a pledge produced by the Iowa FAMiLY LEADER that included language suggesting black children were better off under slavery than they are now. Bachmann offered half-hearted apology at the time, saying she had only signed the “candidate vow,” not the part that included slavery, and compared it to “economic enslavement” brought on by taxes.

But in his profile of Bachmann released yesterday, The New Yorker’s Ryan Lizza revealed that Bachmann’s “worldview” on slavery goes much deeper. In 2002, then-state Sen. Bachmann’s campaign posted a “must-read” list of books on her web site. Included in the list were the Declaration of Independence, The Federalist Papers, and a book titled, “Call of Duty: The Sterling Nobility of Robert E. Lee,” authored by J. Steven Wilkins. The Lee biography includes this apologetic passage:

Northerners were often shocked and offended by the familiarity that existed as a matter of course between the whites and blacks of the old South. This was one of the surprising and unintended consequences of slavery. Slavery, as it operated in the pervasively Christian society which was the old South, was not an adversarial relationship founded on racial animosity. In fact, it bred on the whole, not contempt, but, over time, mutual respect. This produced a mutual esteem of the sort that always results when men give themselves to a common cause.

The credit for this startling reality must go to the Christian faith.

Wilkins goes on to claim that slavery existed on a “relationship of trust and esteem,” that positive race relations may have progressed further if the pro-slavery South had won the war, and that Lee, despite being a slave-owner himself, “never held any animosity for blacks.”

After explaining the “cruelty and barbarism” of “pagan” Africa, he goes on:

The fact was (and is) easily demonstrable that, taken as a whole, there is no question that blacks in this country, slavery notwithstanding, were “immeasurably better off” in nearly every way [than they were in Africa].

In Lee’s view, however, emancipation could only be accomplished successfully if it was gradual. Time was needed for the sanctifying effects of Christianity to work on the black race and fit its people for freedom. [...]

Abolitionism was not the best answer.

The idea that the relationships between white slave owners and black slaves were not founded on racial animosity has no basis in history. Whites viewed themselves as inherently superior to blacks, who were bought and sold as property and, for population counts, were worth only three-fifths of a white person. The idea that sanctifying blacks through Christianity made them “immeasurably better off” than they would have been in Africa, meanwhile, ignores the utter loss of humanity caused by enslavement. It ignores the untold number of blacks who died on slave ships, the sale of blacks at auctions as if they were livestock, the families split up at an owner’s whim, and the loss of all basic human rights, not least of which was their own free will.

Bachmann has a history of using slavery analogies, and she has made multiple mistakes regarding American history already in her campaign. None, however, is nearly as disturbing as her love for a book that attempts to explain away the horrors of slavery by rewriting history to make it seem like it was a minor price to pay for the sanctifying favors whites did blacks by bringing them to America as slaves.
at 1:59 AM