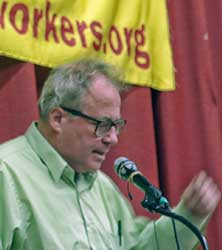 The billionaire class has been on an offensive against workers and oppressed people for over 30 years. These parasites were finally able to overthrow the Soviet Union in 1991, a terrible defeat for every poor person on the planet.

This political reaction has included a fantastic drop in the number of strikes in the United States.

In 1974, there were 424 strikes involving at least a thousand workers. Thirty-five years later, in 2009, there were just five of these strikes in a country with over 300 million people.

We haven’t been defeated on the battlefield. The capitalist class — through its ownership of the means of production — used the scientific-technological revolution to take so many of our battlefields away.

Thousands of strongholds of our class in basic industry and transportation have been destroyed.

This deliberate deindustrialization has been aimed at Black workers. Big capital wanted to end their dependence on Black labor.

Forty years ago, a quarter of the workers in the steel mills and auto plants were African-American.

Comrade Sam Marcy wrote about this capitalist agenda 30 years ago in a remarkable article entitled, “Lynch law in Buffalo, From the Erie Canal to the St. Lawrence Seaway.”

It was written in 1980, after six Black men were lynched in Buffalo.

“The ruling class now looks at the Black population differently,” Marcy wrote, “than it did in the days of the Underground Railroad, when it saw in the anti-slavery struggle a source of cheap labor. It now dares look upon the Black workers in particular as a surplus population, along with white workers and unemployed. It looks upon them with disdain, as a drain on their government budget, as a drag on their system, and as a dangerous source of social convulsions.”

Yet Black workers continue to be the backbone of the labor movement. They’ve been joined by millions of Latina and Latino, Asian and immigrant workers who’ve revived May Day in the country where the holiday was born.

High tech is a cesspool of discrimination. In 1999, just 7 percent of the workers in Silicon Valley were Latina or Latino, while only 4 percent were Black.

GM and Ford haven’t forgotten how Black workers shook their plants in the 1960s and 1970s.

The highest organizational expression of the Black liberation struggle was the Black Panther Party and the League of Revolutionary Black Workers in Detroit.

Big capital’s answer has been to build virtually all the new auto plants away from large concentrations of Black workers ever since GM opened its Lordstown, Ohio, plant in 1968.

But the layoffs at Chrysler were worse. It was the conscious elimination of a predominately Black workforce that was the vanguard of the U.S. working class.

This was shown on July 24, 1973, when two Black workers — Larry Carter and Issac Shorter — turned off the power at the Jefferson Avenue assembly plant in Detroit. This was the first big sit-down strike in 36 years.

The wholesale destruction of heavy industry in the Midwest caused the median income of African Americans to drop by 36 percent between 1978 and 1982. A reverse migration began back to the South.

The firing of hundreds of thousands of Black workers in auto, steel and other unionized occupations has gone hand-in-hand with their wholesale incarceration.

The racist character of capitalist investment can be seen in Wisconsin. Between 1977 and 1992, 55,000 manufacturing jobs were destroyed in Milwaukee County. But the rest of the state, which with a few exceptions is overwhelmingly white, gained 66,000 of these factory jobs.

Today in Wisconsin, one out of 25 African Americans is in jail.

The answer to oppression is revolution. Cutting Social Security and Medicare will not be tolerated by the masses. The jobless will fight before they starve. We have to win people to see that a socialist revolution is the only solution.
at 1:54 AM