Johnnie Stevens: 'The War on Libya is Against All of Africa" 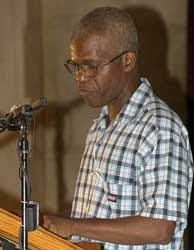 I want to ask you all to come out on Sat., Aug. 13, to march in Harlem against the attacks on Libya and Zimbabwe and against the economic cuts of teachers and workers. Who’s all coming out for the march in Harlem, please stand up.

(The audience stood up.)

Our party’s first demonstration was in 1959 at Rockefeller Center in defense of Congo. This great country in the center of Africa was then still a colony of Belgium. Less than two years later, the CIA and Belgian colonialists tortured and murdered Congolese leader Patrice Lumumba on Jan. 17, 1961. President Eisenhower ordered Lumumba’s assassination.

The U.S., France, Britain and Italy are trying to recolonize Libya today, just like they recolonized Congo 50 years ago.

Back then the colonialists used a traitor named Moise Tshombe to seize mineral-rich Katanga province. Today the Libyan traitors have seized Benghazi.

The Rockefellers had a major stake in the Belgian mining giant Union Minière that exploited Congo’s incredible mineral wealth, particularly in Katanga province.

Everybody knows the current war against Libya is a bloody oil war. Libya has the greatest petroleum reserves of any country in Africa.

Big Oil ordered the bombs that have been dropped on the children of Libya. And the Rockefeller dynasty is still the biggest family among all the oil billionaires. These pigs have been exploiting Africa for a century.

It was David Rockefeller — then the chair of Chase Manhattan Bank — who saved South Africa’s apartheid regime from bankruptcy following the Sharpeville massacre in 1960.

Libya is a former Italian colony. Hundreds of thousands of Libyans were killed by the fascist dictator Benito Mussolini, who was finally strung up by Italian workers.

Mussolini invaded Ethiopia. Just like oppressed people stood with Ethiopia in 1935, so do we stand with Libya today against imperialist assault.

These imperialists lie when they claim they’re for “democracy” in Libya. Who elected the so-called rebels in Libya? Nobody!

These rebels in Libya are no different than the Confederate rebels, Jefferson Davis and Stonewall Jackson. The Libyan rebels have lynched Black African workers. Racist murals attacking Libyan leader Moammar Gadhafi can be seen in the rebel capital of Benghazi.

The great ally and servant of Big Oil — the military-industrial complex — has also made big bucks from attacking Libya. Hundreds of cruise missiles have been fired at Libya, and now the stockpile has to be replaced. That’s plenty of good business for Boeing, Lockheed and the rest of the merchants of death.

Each of these cruise missiles cost at least $1.4 million. That’s enough money to hire 20 teachers. Yet billionaire Mayor Bloomberg has cut thousands of teacher jobs in New York City.

The military-industrial complex is also making thousands of drones that are killing people from Pakistan and Afghanistan to Libya. Drones are being used to hunt Gadhafi.

And they’re going to be used by the cops right here in the U.S. — if they aren’t being used already. J. Edgar Hoover and Cointelpro would have loved to use drones to hunt the Panthers and Sister Angela Davis.

But as Dr. Huey P. Newton said, the power of the people is greater than the man’s technology. The people united will defeat the drones.

The war against Libya is a racist war. It’s accompanied by increased racism inside the United States.

The former head of the International Monetary Fund, Dominique Strauss-Kahn, is a rapist pig. We stand with Nafissatou Diallo, the survivor of Strauss-Kahn’s rape. The media, like the vile New York Post, have smeared this brave hotel worker, who is an immigrant from Guinea.

Libya — the real Libya of working people who resist the continual U.S./NATO bombing — is not alone. The countries of the world’s “South” have said no to the war against Libya. The president of the Bolivarian Republic of Venezuela, Hugo Chávez Frías, has led the way in defending Libya. All of us here are wishing a speedy recovery to President Chávez!

The African Union has also denounced the war against Libya. But the capitalist media has ignored this real news. They’re too busy demonizing African leaders like Gadhafi and Zimbabwe President Robert Mugabe.

Zimbabwe is also on imperialism’s hit list. Mugabe has given farms to thousands of Africans whose land was stolen by colonialists. This is what should have happened in the United States following the Civil War.

Get out of Libya! Hands off Zimbabwe!

Forward to a united socialist Africa!
at 1:48 AM