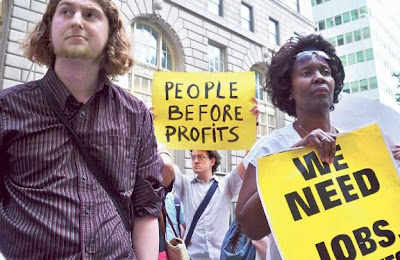 From: New York AM

New Yorkers struggled Tuesday to find the right words to express their rage at a debt deal that avoided default but left the economy in fragile shape.

Many condemned lawmakers for crafting a deal that didn’t resolve the economy’s core deficiencies, and protects the interests of the monied class, not the middle class.

“The problem doesn’t seem to be addressed,” she said.

Jamie Bratcher, 37, a telemarketer from midtown, said he feels let down by lawmakers.

“Power corrupts men and this is a power struggle when they’re supposed to be serving us,” Bratcher said.

Anger at the deal drove dozens of protestors to gather near Wall Street Tuesday, decrying the budget cuts they say will hurt regular Americans. They waved signs, chanting, “Make the bankers pay!”

“It’s a war on the working class,” said Larry Hales, 34, one of the protestors from the group, called New Yorkers against Budget Cuts.

“When someone makes war on you, you don’t lay down … you fight back by any means necessary,” Hales said, “Are you ready to fight?”

“What happened this infamous day is a threat to everyone that is not a millionaire or a billionaire,” he said.

It was easy to find disgust on the Web Tuesday as well.

“Praising the Republicans for the debt deal is like giving a kidnapper a medal when he releases his hostage,” tweeted comedian Andy Borowitz.

A twitter user, Corey443, summed up disappointments many Democrats have expressed with how President Barack Obama handled negotiations with the GOP.

“When Obama preached “Change” I think he meant “Change” into a Republican.”
at 1:45 AM