Heinz Kessler, Still a Communist, and Still Proud As Ever! 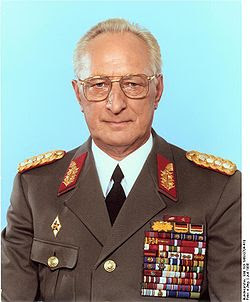 Berlin, Aug 6 (ANI): Architect and hardline Communist Heinz Kessler still takes pride about building the Berlin Wall, which according to him, was a triumph of socialism.

The Berlin Wall was built nine years after the East German Government decided to erect an 'Iron Curtain' between East and West Germany, and Kessler oversaw its construction about 50 years ago.

The wall cut off the Allied controlled West Berlin from Soviet- administered East Germany and closed the city as an escape route from East to West.

Kessler still wishes that the wall, which began to fall from 1989 in the wake of citizens' protest, would have been erect.

"The wall was our protection. It was a fantastic experience for me to be part of it! Sure, now it's gone, I hear about the new freedom that people are enjoying in eastern Europe. But how do you define freedom?" Kessler said.

"Millions of people in eastern Europe are now free from employment, free from safe streets, free from health care, free from social security. While the wall was standing, there was peace. Today there's hardly a place that isn't in flames. Were you ever in East Germany? It was a wonderful country! ", he added.

Kessler describes the re-united Germany as "callous and unjust".

Being a hardline communist, Kessler has been barred from being a member of the Party of Democratic Socialism, which is striving to convey a moderate, democratic image.

He was also convicted of manslaughter and was jailed for seven years and a half for ordering a shootout order at refugees.

"On some matters I cannot change my position. I refuse to sacrifice my Communist beliefs to the fashion of the day. I am and remain a believer in democratic centralism and a revolutionary socialist party ", mirror.co.uk quoted Kessler, as saying. (ANI)