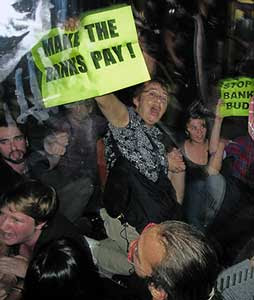 On June 28, as the New York City Council was scheduled to vote on a pro-banker, anti-people budget deal, more than 100 residents of the “Bloombergville” encampment marched around City Hall. They had been sleeping on the sidewalk nearby for 16 days trying to stop Mayor Michael Bloomberg’s impending cuts.

At the same time, an organized resistance group entered the City Council office building across the street at 250 Broadway.

The marchers surged across the street to block the Council building in support of the resistance group, who were sitting down in the lobby, chanting “Stop the vote! Make the bankers pay! Stop the bankers’ budget! We have a right to be here!”

Those inside locked arms to block the entrance as police began separating the protesters and arresting them.

Outside, the crowd shouted “Let them go!” and “They say cut back, we say fight back!” Police pushed a few of those taking part in the inside action out the door. But the crowd in front surged forward to join those inside. Then, as police started to take the handcuffed sit-in protesters out a side entrance, the crowd outside met them, calling “Let them go!”

They surrounded the two police vans the arrestees were being loaded into and kept them from driving away. Police and protesters chased each other for two blocks.

Protests continued into the night, preventing a vote on the budget until the following morning.

WW spoke with one of those arrested, Sara Flounders. Flounders is co-director of the International Action Center and a veteran of dozens, if not hundreds, of protests, sit-ins, occupations, encampments and civil disobedience actions. She was in the mass actions that shut down New York over Sean Bell's murder by the police. At that time hundreds of protesters closed all bridges and tunnels into the city.

“The Bloombergville protest succeeded in postponing the budget vote,” Flounders commented, “and in sending a strong message, widely covered in the media, of popular resistance and opposition to this pro-banker budget. It was part of a whole series of resistance actions -- from mass demonstrations by the unions to the 16-day encampment in front of City Hall to the civil disobedience action before the budget vote. “After our arrest the police planned to issue a summons for a minor violation. But word came down from higher-up, after the initial paperwork was already completed and we were almost out the door, to hold us for 24 hours and send us down to the Central lockup. “It’s almost entirely young Black and Latino people in the prison.” Flounders observed. “That’s who the police target. That’s the neighborhoods the cops are sent to and the arrest quotas they’re given. To these youth I was ‘Grandma.’

“The whole system is set up to criminalize Black and Latino youth for doing things that are absolutely part of urban life, but for which they are particularly targeted,” Flounders continued. “They are run through the system – printed, scanned, photos taken, etc. – and come out with a record and a mug shot. That’s the racist way the courts, police and jails function.”

Flounders said most of the people in the jail were “arrested for fare card violations, having an open container on their own front stoop, being in a city park after 10 p.m., smoking a joint -- petty, petty ‘crimes.’ Each of them, to get out, has to plead guilty to something, and of course they can’t afford a private lawyer. They get just a few minutes with a court-appointed attorney.

“These prisoners were overwhelmingly friendly and enthusiastically interested in the Bloombergville protest,” Flounders said. “They respected the idea of being arrested for a cause, and for challenging the repressive system.

“The Bloombergville encampment has been important,” Flounders commented, placing it alongside “the experience of past encampments and days of mass actions at the 2008 Democratic National Convention in Denver, the Republican National Convention the same year in Minneapolis, the 2009 People’s Summit tent city at the G20 in Pittsburgh, the Detroit encampment during a meeting of business leaders and CEOs, the Washington, D.C., encampments against the war and this winter's mass takeover of the State Capitol in Madison, Wisconsin – to mention a few.”

She added that this protest is “also part of the whole climate of current confrontations in Greece, Spain and Great Britain, and the revolutionary change brought about by the massive occupation of Tahrir Square in Egypt, which grew into millions. There have been invaluable lessons. Millions are watching these confrontations, the tremendous occupations in Wisconsin and the actions in Trenton, N.J., last week.

“The question is how to continue the struggle and confront the bankers’ agenda. They want to cut every desperately needed social program in cities across the country, but to them two things are untouchable: the billions of dollars in interest paid to the banks and the hundreds of billions spent on war. It was really important that this budget attack not go down without a struggle, and we need to continue the fight against all these cuts.”

All 13 Bloombergville arrestees were released after spending 24 hours in jail. Charged with trespassing, they were fined $130 each.

Flounders concluded with an appeal: “We urgently need to raise $1,700 to cover the fines. Please contribute whatever you can, as soon as possible. All are invited to a fundraiser on Saturday, July 9, to honor the Bloombergville attorneys, who contributed their legal services, and also Picture The Homeless, who guided the setup of our encampment and helped us keep it legal and viable for more than two weeks.”

Make donations through PayPal; send to bloombergville13@gmail.com. They must come from a bank account or PayPal account; the group cannot accept debit/credit card payments.