Bloombergville's Larry Hales on What Next? 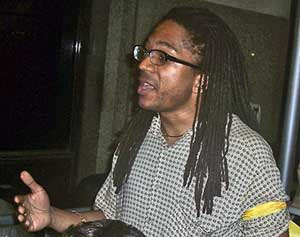 Larry Hales, a leading Bloombergville activist, founder of the CUNY Mobilization Network and a New Yorkers Against the Budget Cuts leader, spoke with Workers World writer Dee Knight about the struggle experiences in different countries and looked to the future:

The struggle in the U.S. has not reached the pitch of what we have seen around the world in response to a neoliberal agenda that is now being imposed even in the imperialist nations. The mass response in Wisconsin was the high-water mark here so far, and had not been seen in many years. Despite the size and militancy of the struggle there — which included the occupation of the state Capitol — Gov. Scott Walker’s bill seeking to dismantle public sector unions passed.

Instead of opening up a struggle at the workplace or in the streets, the union leadership has been using the courts to fight Walker. Walker’s attack requires the unions in Wisconsin and nationally to mobilize all their forces. This is becoming increasingly important, as from Ohio to Michigan to New Jersey, both Democrats and Republicans are attacking public sector unions on behalf of the banks and the ruling class.

These attacks, which include massive cuts of social services and privatizations, reflect the current period. It can be seen even in Europe, especially Greece, that the capitalist governments, doing the bidding of the ruling class, are hell-bent on their program, which is similar to structural adjustments forced on Third World nations by the IMF and World Bank decades ago.

Greece has seen numerous general strikes and large-scale actions by the working class in the millions, yet the austerity being forced on Greece by European banking interests continues and has intensified.

The struggle in the U.S. has waned a bit since workers and students in Wisconsin inspired the working class here. It was clear before then, and even more so now, that protests alone, whether they be the normal rally, assembly and march or something more creative, have an end time and are not enough.

“A mass movement is needed: one that understands that these attacks are aimed at permanently destroying public sector unions and vital social services, one that unites all sectors of the working class and uses many tactics with the goal of pushing back this assault.

“Such a struggle also needs demands that put it on the offensive. It can call for a massive jobs program; an end to imperialist war; abolishing the Pentagon; education, housing and healthcare for all — a progressive program that is in solidarity with oppressed people here and abroad.”
at 4:48 PM