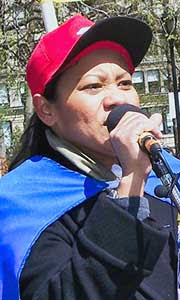 Lucy Pagoada, a Honduran who lives in New York and who has been elected to the Popular National Resistance Front in her homeland, was a delegate to conferences called by the International Migrant Alliance and the International League of Peoples’ Struggle held in the Philippines this July. Later she traveled around the Philippines. In an interview with Workers World, she shared her experiences and perceptions.

“When I arrived in the Philippines,” said Pagoada, “I was astonished at the huge number of families greeting visiting relatives. I realized immediately that forced migration keeps Filipino families apart. In Honduras there is forced migration too, but people cannot return home for most of the migrants from my country are undocumented.”

The Philippine government actually sets up programs with the International Monetary Fund to effectively “export” millions of Filipinos all over the world as labor, with a heavy concentration in the health professions. These people may come back for a visit, but must return to a distant land to make money so they can send remittances to their families, who depend on them to stay alive.

“When I drove through Manila, I saw so many children naked, with protruding bellies, indicating hunger and sickness. Manila has the biggest shopping mall in all Asia, where wealthy people can shop without seeing the poverty that dominates the capital city. This was my introduction to the International Migrants Alliance held at the University of the Philippines.

“At the university I was greeted by some of the most advanced students I have ever met. We share a history of colonialism. Spain invaded the Philippines and Latin America in the 16th century, grabbed the land, and murdered and exploited our people.

“I met people from around the world at the IMA. I learned about organizing against widespread human trafficking, especially from Asia, which includes the selling of brides from developing countries to men in the advanced imperialist countries.”

Pagoada continued, “So many Filipinos are forced to migrate — 3 million out of a population of 99 million. So while the emotional cost to the families in the 7,107 islands of the Philippines is great, the economic crisis and the viciousness of all the U.S.-supported governments — including the present government of NoyNoy Aquino, Cory Aquino’s son — have produced the greatest militancy. Filipinos organize everywhere in the world.

“Jose Maria Sison was present via Skype throughout the conferences I attended. He is the leader of the Philippine struggle, though he is in forced exile in The Netherlands and prohibited from returning to his homeland. I became increasingly interested in this philosopher-intellectual-revolutionary who was so beloved by the people at the conference. His comments were amazing! With his leadership and faith in the organizers, there were three international conferences this July in Manila — IMA, ILPS and the International Women’s Alliance.

“Filipinos defy the neoliberal regulations their government enforces, which restrict the organizing of labor unions. The courage of Filipino workers and peasants who organize strikes and resistance is really inspiring.”

The U.S. supports this repression as part of its “war on terrorism.” Human rights organizations charge that the Armed Forces of the Philippines have been responsible for more than 1,000 murders and abductions of activists. The military received $15 million in U.S. aid in 2010, but an additional $434 million of “nonmilitary” U.S. support came from the Millennium Challenge Corp., which was set up by the George W. Bush administration and is closely tied to “counterinsurgency” programs. Washington is now also promising even more military aid and an increasing U.S. troop presence.

“This year at the IMA and ILPS conferences,” continued Pagoada, “there were many representatives from Latin America. When we received word of Comandante Hugo Chávez’s cancer, we were saddened, but we wrote a resolution for the conferences in solidarity with Chávez and the Venezuelan people.

“At the end of the ILPS conference, the ambassador to the Philippines from Venezuela gave a powerful anti-imperialist speech and invited us to an ILPS meeting next year in Caracas. Jose Maria Sison got on Skype to offer his revolutionary solidarity with Venezuela. This was a tremendous moment in the conference. Sadly, we also had to pass a resolution to condemn the assassination in Guatemala of the great revolutionary musician Facundo Cabral, urging a serious investigation of his murder.

“I was proud to represent the New York May 1 Coalition and the Popular National Resistance Front of Honduras and to contribute to these conferences, but for me it was a great school for resistance and revolution.”
at 4:08 AM