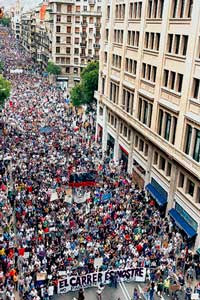 Workers and young people in Greece held a general strike and mass demonstrations June 15 to put up the strongest resistance so far to the relentless offensive by European bankers and billionaires against the working class on that continent. In Spain, too, more than a half million took to the streets on June 19.

Greece’s left-wing labor confederation PAME held the third general strike of 2011 on June 15, protesting the government’s newest plans to cut another 6.4 billion euros from the already existing austerity budget. PAME, which marched in 67 cities, represents about half the organized workers and has led the workers’ struggle against the Troika.

Strikers encircled the presidential mansion, the premier’s office and Parliament to stop the representatives from reaching the building to open debate on Prime Minister George Papandreou’s new cuts.

A movement something like the one that recently occupied the central squares of cities in Spain was also in the streets with less clear political demands but still opposed to austerity. Communist Party (KKE) representatives left the debate in parliament to join the demonstration.

The PASOK regime, led by Papandreou, announced a shuffle of positions in the cabinet that same day, presenting it as a change. Though it showed the government felt mass pressure, the change was barely cosmetic.

The next day, the KKE held demonstrations in cities across Greece to show its complete lack of confidence in the government, to expose the “change” as meaningless and to insist that the working class had the right to refuse any sacrifice to help solve the bankers’ debt crisis.

KKE Secretary General Aleka Papariga told the thousands rallying in Athens, “We must highlight what the business groups, monopolies, the EU and NATO owe to the people as do the bourgeois parties of ND and PASOK ... the people must not pay anything. The people must with their own hands take back what they are owed and what belongs to them.” (www.kke.gr, June 17)

The corporate media misrepresents the European capitalist offensive as an effort to discipline countries that allegedly “spend beyond their means” on social services and thus defend the common European currency.

It is true there is a financial and economic crisis that has brought massive unemployment. But the “austerity measures” are the major European — and U.S. — banks’ strategy not to end unemployment but to collect payments on public loans and assure profits for finance capital. To do this, the European bankers have three instruments: the International Monetary Fund, the European Commission and the European Central Bank. Popular organizations fighting to defend the social programs call these three bodies “The Troika.”

The Troika has threatened the governments on Europe’s economic periphery — Greece, Portugal, Ireland, Spain and Iceland especially — that it will withhold loans unless the governments severely cut social programs.

The Troika is a threat first and foremost to the working class but also to the very sovereignty of the countries it moves in on. It imposes austerity. It forces privatization of state-owned industry. The Troika serves banks located mainly in France and Germany, the dominant imperialist powers in the Eurozone.

Last year’s austerity program in Greece did nothing to resolve the debt crisis and only increased the unemployment rate, now officially at more than 16 percent. Spain’s is 21 percent.

This bankers’ attack in Europe has similarities to the one against U.S. cities and states, where local public budgets are being cut to the bone while money is used first to pay banks for bonds. In both places, the bosses and bankers are aggressively waging class struggle through an austerity program that makes the workers pay the costs to bail out the banks.

The attack is also similar to the Structural Adjustment Programs that the IMF and World Bank imposed on countries in Latin America, Africa and Asia during the 1980s and 1990s after financial crises that hit hardest outside the imperialist centers of the U.S., Western Europe and Japan. These programs often threw the most vulnerable sectors of the indebted societies into hunger and misery.

In Europe, this offensive is most brutal in the periphery, and the resistance too is strongest there, right now in Greece and Spain.

Hundreds of thousands march in Spain

Somewhere between a half-million and a million people demonstrated in more than 50 cities in the Spanish state, in every region, on June 19 to oppose the regime in office and its version of austerity and to demand a future for the youth.

Starting May 15, a youthful movement including many young workers and unemployed — along with anyone who wanted to struggle — grew up outside the major unions and parliamentary political parties. The role of the union leadership in Spain differs from that in Greece. After one general strike last September, the leaders of the two major union confederations in the Spanish state made an agreement with the government and have deserted the struggle.

Disgusted with nearly all political leaders and distrustful of most union leadership, young people — who face official unemployment of about 45 percent — occupied the main squares of dozens of cities, staying there in many cases for three to four weeks. Participants made organizational decisions in popular assemblies held in these squares. Their final meetings called for massive mobilizations on June 19, with demands that added up to “Let the rich pay for their crisis,” “No cuts to pensions” and “We want a future.”

Six separate marches came from different neighborhoods in Madrid to gather for a massive rally in Neptune Square. Marches also joined to fill Plaza Catalunya in Barcelona, and there are reports that another 80,000 people marched in Valencia. Significant protests also took place in Gijon in Asturias, Bilbao and Donastia in the Basque Country, Seville in Andalucia, Vigo and Coruña in Galicia — to name a few. (diagonalperiodico.net, June 20)
at 11:29 PM