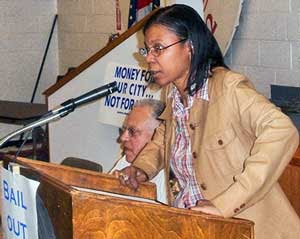 A conference entitled “How the Banks Destroyed Detroit: Make the Banks Pay” was held here at the United Auto Workers Local 22 hall on June 11. The event was sponsored by the Moratorium NOW! Coalition to Stop Foreclosures, Evictions and Utility Shut-offs, which has been demanding a halt to home seizures and placing a freeze on the payment of debt service to the banks by the city of Detroit.

The conference took up some of the major issues facing the city and other urban areas throughout the U.S. Attorney and activist Jerry Goldberg chaired the gathering’s morning session and outlined the role of financial institutions that forced 237,000 people from Detroit within the last decade.

Goldberg noted that the same banks that engaged in predatory lending and fraud got trillions of dollars from the government but refuse to modify homeowners’ loans. At the same time, the banks get paid full value for the so-called “toxic assets” when they force working people from their homes.

Goldberg pointed out, “There is no money for schools, students or teachers while 87 percent of state school funds go directly to the financial firms. Even the casino tax revenues, once touted as the salvation of the city, go directly to a trustee who pays out debt service to the banks.

“At one point Detroit was the leading city for home ownership among workers, particularly African Americans. Today it is at the bottom,” Goldberg said.

Labor historian and People Before Banks Coalition organizer Steve Babson gave a PowerPoint presentation on the history of the struggle against economic injustice in Detroit, including the example of the Unemployed Councils in the 1930s, which organized communities to stop evictions and place people back in their homes.

Congressmember Hansen Clarke congratulated the Moratorium NOW! Coalition for pioneering the work around housing as a human right. Clarke will submit a bill in the House of Representatives to impose a national moratorium on foreclosures.

Attorney Vanessa Fluker, a specialist on home foreclosure law, spoke on how government-controlled Fannie Mae and Freddie Mac are guaranteed to receive payment for defaulted home loans at the full value of the mortgage. Fluker noted there is no incentive for banks to modify loans if they reap the inflated value of the mortgage when people are thrown out of their homes.

Cheryl LaBash, a retired city worker, talked about the impact of the banks on the status of civil servants. She noted that issuing Pension Obligation Bonds by Detroit further heightened the municipal budget deficit. The bond rating agencies control the value of city borrowing from the financial institutions, and consequently Detroit is deeply indebted to the banks due to the high cost of borrowing and the usurious interest rates charged to the taxpayers.

Susan Schnur, a bus driver and member of the Amalgamated Transit Union, discussed how cuts have had a severe impact on public transportation in Cleveland where she resides. “Transit cuts determine which neighborhoods will be saved and the ones that will be destroyed.”

Schnur also discussed the attacks on public employees that have taken place in Ohio. The state passed similar legislation to that recently upheld in Wisconsin, which would eliminate collective bargaining for public employees and bust the unions.

Bob Day, an attorney who works for Wayne County Legal Services, noted that many developers are buying up foreclosed and abandoned homes in Detroit for a dollar from the banks. Then they sell these homes on land contracts that are fraudulent.

“One corporation in South Carolina bought 2,000 abandoned homes in Detroit, and if people default on the land contract deals, they are swiftly evicted from the properties. The consumers are often stuck with large water bills and back taxes that run into the thousands of dollars,” Day told the crowd.

Detroit City Councilperson JoAnn Watson supported the demand for a moratorium on foreclosures and evictions. She reported on her proposal for the allocation of $10 billion from the federal government to rebuild Detroit in the same way a Marshall Plan was enacted in Europe to foster development after World War II.

Steve Tobocman, a representative of the Michigan Foreclosure Task Force and former state representative, warned of efforts underway in the current state legislature to reduce the redemption period for foreclosed homes from six to three months.

Lisa Franklin of Warriors on Wheels discussed the deplorable conditions of the city’s para-transit service, which forces people with disabilities to wait sometimes up to three hours for connecting transportation. The city is still plagued with lack of accessibility for people in wheelchairs.

Other speakers included Derek Thacker of the Detroit chapter of Fight Imperialism, Stand Together (FIST), who pointed out that student loan debt has now surpassed credit card debt in the U.S. Bryan Pfeifer, an organizer of the Wisconsin Bail Out the People Movement, reported on the tremendous fightback against austerity and union busting now going on in that state.

Ben Carroll, a youth organizer from North Carolina, discussed the struggle of public sector workers in the state and the need to organize the South, which is still a bastion of low-wage labor and racism. Carroll said the Democratic National Convention will be held in Charlotte, N.C., in September 2012.

The Detroit conference agreed to a resolution calling for convening an “International Tribunal on the Crimes Committed by the Banks” that would coincide with the DNC in Charlotte. The city is home to the headquarters of Bank of America, one of the worst culprits in the foreclosure crisis.

Autoworker and UAW activist Martha Grevatt talked about how the bailout of the auto industry created further opportunities to lower workers’ wages and cut benefits (see accompanying article). She pointed to the two-tier wage system as a means to break down solidarity among workers and to maximize profits for the auto companies.

The participants in the conference passed several action proposals, including support for a resolution sponsored by Wayne County Commissioner Martha G. Scott to halt sheriff mortgage sales in the county.

It was also agreed to produce 50,000 leaflets for distribution in southeast Michigan demanding a moratorium on foreclosures, evictions, utility shut-offs and payment of debt service to the banks. A hearing proposed by City Councilperson JoAnn Watson to coincide with the 44th anniversary of the Detroit rebellion of 1967 was endorsed.

The conference voted to demand a moratorium on student loan debt and the advancement of demands that prohibit school closings and teacher layoffs in Michigan.

The conference agreed to reconvene in September to assess progress made and lessons learned from the implementation of the action proposals.
Articles copyright 1995-2011 Workers World. Verbatim copying and distribution of this entire article is permitted in any medium without royalty provided this notice is preserved.
at 11:31 PM