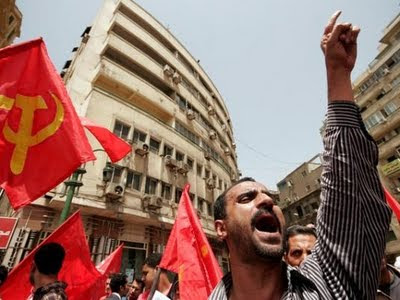 Attiya Al-Serafi, the leftist, trade unionist, activist, writer -- and above all, worker -- died yesterday at the age of 85.

Am Attiya, as younger activists he met used to call him, started his syndical and political activism in the 1940s, carrying on the struggle in one way or another until his death.

He was last in trouble with the police in 2005 for collecting donations to support the Palestinian Intifada, a charge of which Am Attiya said he was proud and which resulted in him spending 15 days in jail.

"Am Attiya managed to collect as many donations from his small hometown as were collected all over Cairo. He used to talk to the peasants explaining to them the importance of solidarity with the Palestinians, spreading political awareness too. Maybe that's why the authorities were disturbed by his action," says Saber Barakat, a political and syndical activist who followed the path of Am Attiya since he met him in the seventies.

Am Attiya remained active until the final days of his life despite the deterioration of his health over the last three years following an accident. Over the last five months he went three times to demonstrate on Tahrir Square.

"He insisted on going to the square after the famous battle of the camel day," recalls Barakat. "I advised him not to go, worrying for his health, but the next morning he was on the square, leaning on his wife and grandson." Am Attiya returned to Tahrir twice more; after Mubarak was ousted and then finally on Labour Day.

Attiya Al-Serafi, born in 1926, started his life working in public textile factories before becoming a ticket collector at West and Middle Delta Bus Company where he became a trade unionist. After, Nasser came to power in 1952 and the state tookover syndicates, Al-Serafi was rejected as a candidate many times.

In 2005 he ran for parliamentary elections in his Nile delta hometown of Meet Ghamr and was initially announced as winner before a mysterious change in the results.

"The town of Meet Gham exploded in angry protests after which Am Attiya was arrested," says Barakat, Am Attiya's devoted follower.
Attiya, who was once a student at Al-Azhar University before being expelled, dedicated substantial time to the people of his town. "He used to write petitions for the people and accompany them to public offices to help them solving their problems," says Barakat.

Attiya Al-Serafi's tough and principled stances, which brought him plenty of trouble throughout his life, continued until his final days.

After 25 January, Am Attiya resigned from Al-Tagamoo, the leftist party he had long belonged to, in protest at its decision not to participate in demonstrations. He then helped found a new leftist party, the Socialist Popular Coalition.

The differences between Am Attiya and the leaders of his party were long-held. The first one emerged when the activist, coming from the rows of the workers, called for syndical pluralism as the way to defy what he called the 'militarisation' of the working class -- the title of one of his books.

"Maybe he was the first to call for pluralism, now his dream is coming true", says Mostafa Bassyouni, a leftist activist.

At the time, most leftist groups -- especially the official left represented by Al-Tagamoo --adopted the government point of view which considered pluralism as a kind of fragmentation of the working class. It was a notion implemented by Nasser as well as the Soviet Union, which much of the Egyptian left took as an example at the time.

"Am Attiya explained his idea at the party conference in 1979. There were only three of us who supported his idea and we were chased out of the conference," recalls Barakat, who was impressed by his mentor's purity and militantism despite their political differences. Am Attiya was a longtime member of the Egyptian Communist party, a secret branch of Al-Tagamoo, that Saber disagreed with.

In the 1990s Am Attiya also started an open battle against the leaders of Al-Tagamoo, including the head of the party Refaat Al-Said. He wrote a book accusing the leaders of the Egyptian communist parties of opportunism.

Am Attiya was harsh with political leaders and people in power but very gentle with ordinary people and friends. "He accepted criticisms from much younger people and I was able to talk with him as a peer despite our differences in age and experience," says Moustafa Bassyouni.

Saber Barakat remembers how Am Attiya spent time with he and his bride during their honeymoon and used to prepare breakfast and lunch for the newly-weds "like a very kind mother".