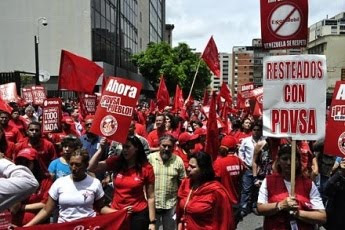 The U.S. State Department enforced the sanctions in an attempt to put further pressure on Iran to halt its nuclear programme by penalising companies which continue to trade with the Islamic Republic.

U.S. Vice Secretary of State James Steinberg, who made the announcement to journalists on Tuesday, said that in approving the sanctions the U.S. wanted to send a “clear message” to companies which continue to “irresponsibly support Iran” – “they will suffer serious consequences,” he said.

Between December 2010 and March 2011 Venezuela, which has friendly bilateral relations with Iran, exported $50 million worth of a fuel additive to Iran. The U.S. government deemed the trade relations to be in breach of the 1996 Iran Sanctions Act.

“The U.S. needs to move quickly to cut off Chávez’s source of revenue, and bring an end to both his influence in Latin America and his dangerous relationship with the terrorist-supporting Iranian regime before it’s too late,” said U.S Congressman and Chairman of the Subcommittee on the Western Hemisphere, Connie Mack.

The measures will also affect other smaller companies in Jersey, Monaco, the United Arab Emirates, Israel and Singapore.

Although Pdvsa will continue to sell oil on the U.S. market, the sanctions – which will last two years – prevent the company from entering into contracts with the U.S. government, as well as barring it from import-export finance programmes and obtaining licenses for U.S. oil processing technology. None of the company’s subsidiaries will be affected.

In a press conference on Tuesday, Venezuelan Minister of Foreign Relations Nicolas Maduro said: “We are not afraid of these sanctions, nor are we going to debate the reasons that the North American government may have, but Venezuela is sovereign in making its decisions.”

An official document rejecting the sanctions was drafted and signed by pro-Chavez Venezuelan ministers, but opposition politicians refused to sign it. “This shows once again that these politicians are representatives of North American imperialism,” said Energy and Oil Minister Rafael Ramirez.

Ramirez also stated: “The imperialist powers are hoping to dictate the rules to us. They will have to go without, because we are going to keep advancing towards creating unity between oil-producing countries.”

In the early hours of this morning Pdvsa workers initiated a day of action in defence of the company, taking part in demonstrations, take-overs of oil refineries, cultural activities and convoking a popular assembly in order to manifest their support for the government’s foreign policy.

Workers have been engaged in activities in Anzoátegui, Carabobo, Monagas and other states throughout the day.

Expressing a similar sentiment, Domingo Franco, who works in Pdvsa, reiterated the workers’ rejection of North American interventionism, stating: “We reject this latest North American interference in Venezuelan matters. The workers are at the ready to defend our oil industry. Our call is to defend the Orinoco [Oil] Belt. The imperial powers want our natural riches and we will defend our resources even with our life”.

Women’s and peasant organisations, alternative media, and community councils also organised a march in Caracas in response to the sanctions. Socialist women’s activist Anais Arismendi said the popular movement condemned “the unilateral decisions taken by a criminal state such as the U.S.A, which don’t respect international conventions,” adding that the U.S. was trying to “organise another right-wing offensive against the processes and countries which are currently liberating their own people”.

Although Iranian President Ahmadinejad maintains that the programme is purely for supplying energy to civilians, the U.S. claims that Iran is developing nuclear weapons.

Ahmadinejad has previously accused “nuclear nations” of “monopolising” science and technology in order to protect their own interests and also of prohibiting other countries from the “peaceful use of nuclear energy”.

In a speech following the inauguration of an oil production project in the city of Abadan on Tuesday, Ahmadinejad accused the U.S. government of supporting dictators in the region. However, he did not comment on the newly imposed sanctions.

“Anywhere there is a dictator he is supported by you...he is your stooge...” he said in direct reference to Washington.

Sanctions against Iran have formed an integral part of U.S. foreign policy since the Islamic Revolution in 1979, with broader sanctions coming into effect during the Clinton administration in the 1990s and from 2005 under President Bush – who also launched banking sanctions. Prior to 1979 Washington and Europe supported and provided assistance for the development of a nuclear plan under the Shah.

In an official statement the Venezuelan government said it would undertake a “general assessment of the situation to determine how these sanctions affect the operational capacity of our oil industry and, therefore, the supply of 1.2 million barrels of oil per day to the U.S.”
at 4:26 AM