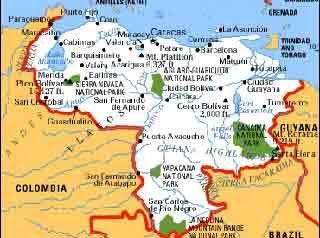 On Tuesday, May 24, 2011, the United States Department of State unilaterally imposed sanctions against Venezuela's state-owned oil company, Petróleos de Venezuela, S.A. (PDVSA), for its alleged relations with the government of Iran. The sanctions are a desperate and weak attempt to link Venezuela to Iran's nuclear energy program as part of an ongoing campaign to justify further aggressive action against the South American oil producing nation.

As citizens of the United States, we unequivocally reject this latest attempt of our administration to demonize the Venezuelan government and undermine the vibrant democracy of the Venezuelan people. The Venezuelan government of Hugo Chavez has already been victim of a coup d'etat in 2002, backed by Washington, which briefly ousted the President from power. Fortunately for the health of Venezuela's democracy, the people fought back, rescued their President, and reinstated constitutional order. Then, as now, the United States stood alone in its support for hostilities against Venezuela's democratically-elected government.

The government of Hugo Chavez has used its oil wealth to invest heavily in improving the wellbeing of its people. Currently, more than 60% of oil industry profits are directed towards social programs in Venezuela, including free healthcare, education, job training, community media, grassroots organizations and subsidized food and housing. The results are notable. Poverty in Venezuela has been reduced by over 50% during the Chavez administration, illiteracy has been eradicated and free, universal healthcare and education are available and accesible to all. These policies of social justice have extended well beyond the borders of Venezuela to the United States though programs that supply free, discounted or subsidized heating oil and fuel to low income neighborhoods, indigenous peoples' communities and homeless shelters throughout the nation.

More than 250,000 US citizens in 25 states and the District of Columbia have benefited to date from the Venezuelan government's subsidized heating oil program, which is run through PDVSA's subsidiary in the United States, CITGO. No other oil company in the world - including US companies - has offered to help low income families suffering from the inflated cost of heating oil during the past six years, except for CITGO. Venezuela's solidarity with the people of the United States has enabled thousands of families to survive through these difficult economic times.

We find it outrageous that the United States government would attempt to demonize the one company, and country, that has been there for our neighbors, putting people before profits. And we call on our representatives in Washington to suspend these sanctions against Venezuela immediately.
at 4:23 AM