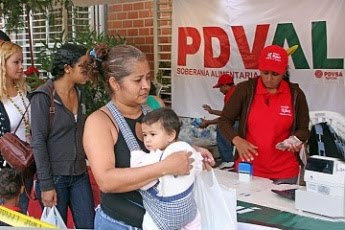 Carlos Osorio replaced Felix Osorio (not related). The placement became official on Tuesday when it was published in the Official Gacette.

Felix Osorio had been minister since January 2008, and Carlos Osorio was president of the National Superintendency of Agricultural Silos and Storage (SADA).

In the same decree published on Tuesday, Venezuelan Food Production and Distribution (PDVAL), a subsidiary of the state owned oil company PDVSA, was transferred to the Ministry of Food.

However, the changeover will not be completely official until the food ministry has made the necessary changes to the constitutive act of PDVAL in order to adapt it to its own regulations and functioning.

PDVAL was previously attached to the Ministry of Energy. In June vice-president Elias Jaua said such a change for PDVAL would allow for better management of the distribution of food.

Jaua made the suggestion during a national scandal which saw authorities arrest the former president of PDVAL, Luis Pulido, for alleged involvement in the diversion of food from the state markets and for hoarding.

The arrest occurred after officials found 1,300 industrial crates full of rice, milk, flour, cooking oil, and other essential food items in the state-owned storage facility CEALCO in Carabobo state, which contracts with PDVAL. The food had been stored past its expiration date. In nearby Cojedes state, 800 containers full of rotting food were discovered after locals complained of the smell.

PDVAL was first created in January 2008 as part of the government’s “food sovereignty and security” platform.
at 9:13 PM