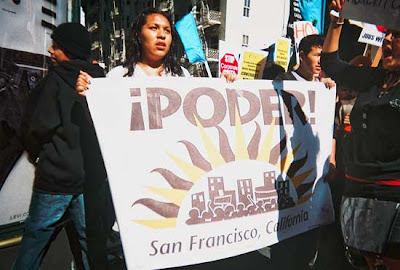 After a brief rally on the sidewalk plaza by the Four Seasons — one of several San Francisco hotels where the workers are working without a contract — several hundred hotel workers, their allies and community activists marched by the Hotel Frank on July 22. The workers at that hotel, just purchased by Wells Fargo Bank, also need a contract. The march continued past Union Square Park, turning on Stockton Street, arriving at the Grand Hyatt Hotel. There, more supporters joined and formed a huge picket line of some 1,200 protesters.

About 150 workers and supporters then formed lines of about 10 each, locking arms and sitting down in civil disobedience directly in front of the hotel. The remaining hundreds continued to picket, chant and leaflet the evening rush-hour pedestrians until those sitting down were all arrested, shoved onto three double-length city buses and driven away.

— Report and photo by Joan Marquardt
at 9:09 PM