Venezuelan President Hugo Chávez informed on July 2 that Salvadoran fugitive Francisco Chávez Abarca, the right-hand man of the terrorist Luis Posada Carriles and mastermind of several bombings in Cuba, was captured in Venezuela. His capture came in the wake of an intelligence operation on the night of July 1, while Abarca attempted to enter Venezuela.

During a speech from the Miraflores Presidential Palace, the president explained that Chávez Abarca was detained in the Simon Bolivar International Airport and was transported to the headquarters of the Bolivarian Intelligence Services (SEBIN) to be interrogated.

Also known as "El Panzón" (Big Belly), Abarca was on Interpol's list of wanted terrorists for his participation in a series of bombings in Cuba during the 1990s.

In the wake of his capture, President Chávez questioned what Abarca's intention in Venezuela could have been and ordered that whoever was waiting for him be revealed. 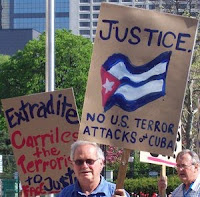 "What did Chávez Abarca want to do in Venezuela? Who was waiting for him?," asked Chávez, prior to stating that he would be turned over to Interpol so that he could be transferred to Cuba, which has sought his arrest.

President Chávez stated that it was strange that a "terrorist of his calibre" appeared in Venezuela in the midst of preparations for September's legislative elections.
Who Is Chávez Abarca?

Chávez Abarca had been detained in El Salvador for two years for being the leader of a group dedicated to stealing cars, but he was never charged with the other international crimes for which he was wanted.

On October 28, 2007, a judge freed Chávez Abarca, and he was never forced to answer for his activities as an accomplice of Luis Posada Carriles during a campaign of bombings that had never been investigated by Salvadoran courts.

In the '90s, he dedicated himself to trafficking drugs and the sale of weapons and money forged in Guatemala.

On May 24, while Chávez Abarca was in Mexico, a bomb exploded in the entrance of the offices of the corporation Cubanacán in the Mexican capital.

President Chávez noted that five years have passed since the Venezuelan government formally requested to the U.S. the extradition of Posada Carriles, a former CIA agent responsible, amongst other crimes, for bombing a Cuban civilian airliner in October 6, 1976 that left 73 civilians dead.

Posada Carriles remains free in the U.S. and is only charged with minor immigration offenses. The U.S. has not responded to Venezuela's extradition request.

(Telesur, Press and Communications Office of the Embassy of the Bolivarian Republic of Venezuela to the U.S)
at 7:33 PM