Fight Back! News: Victory for the Milwaukee 16! 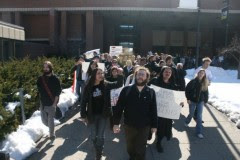 From: Fight Back! News

Milwaukee, WI - The Milwaukee 16, the students who were arrested at the University of Wisconsin-Milwaukee (UWM) on March 4, the National Day of Action to Defend Education, have achieved victory. On June 29, the University offered to drop the charges and the investigation into the conduct of the UWM campus police continues.

At the University of Wisconsin-Milwaukee on March 4, the Students for a Democratic Society (SDS) led the charge of nearly 200 students and workers at the Chancellors office to demand an end to wage cuts, tuition hikes and union busting. The UWM police responded by pepper spraying protesters, arresting a student based on racial profiling and aggressively detaining other students and workers. The university community, including faculty, staff and students, organized in outrage at the response of the police and the administration on March 4. As a result, the Milwaukee 16 will have their charges dropped. SDS member Molly Ubbesen states, “On March 4, the university tried to silence our voices by arresting protesters, but we will continue to fight for democracy and education rights.”

After March 4, UWM Chancellor Santiago agreed to meet with members of the Education Rights Campaign regarding their demands. Students and workers accompanied their representatives, standing outside for hours in the rain to hear that some of their demands would be met. Santiago agreed to address their demands publicly, which led to the UWM Panel on Education Rights, where a group of professors, workers, students and administrators spoke about the issues to the media and an audience of nearly 200 people. At the panel, Santiago denied the request to drop the charges, so the Education Rights Campaign organized another protest where students stormed a Board of Regents meeting demanding that the charges be dropped. As a result of the demonstration and support from students, staff and faculty of the campus community, all of the charges will be dropped for the Milwaukee 16.

Though the charges will be dropped, SDS and the Education Rights Campaign will continue to seek justice for those who were mistreated by the police on March 4, through a formal third party investigation. Rachel Matteson, one of the Milwaukee 16 states, “The investigation of the UWM campus police is an attempt to protect democracy on our campus from the people who have tried to take our rights away from us.”

SDS began organizing the Education Rights Campaign at UWM in the fall of 2009, and now over 20 student and worker organizations are active in defense of their jobs and their education. They have worked in coalition with other SDS chapters and organizations around the country to demand an end to wage cuts and tuition hikes. SDS member Mary Rutkowski explains, “The goal of the education rights campaign is for our university system to educate students, not earn a profit.”

As tuition rises and wages are cut at universities around the country, the fight continues. SDS and others are organizing nationally to demand that the rich pay for their economic crisis, not students and workers. October 7 will be the next National Day of Action to Defend Education. Students and workers are already organizing to make this another historic day in the struggle for jobs and education.
at 7:09 PM