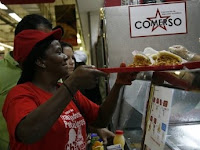 Providing the Venezuelan population with good food at fair prices is the principle goal behind the inauguration of seven new socialist arepa restaurants in the country, confirmed Commerce Minister Richard Canan last Saturday.

During a tour of a recently opened government run restaurant in the neighborhood La Rinconada in Caracas, Canan highlighted how these new facilities are breaking with older models of doing business in Venezuela.

“The creation of these socialist arepa restaurants allows us to demonstrate to capitalist businesses that it is possible to have a venue where food can be sold at a fair price and not as a commodity, as it is under capitalist concepts”.

Arepas represent the single most important food of the Venezuelan diet. They consist of corn flour patties, which, once flattened and grilled, are slit open and filled with chicken, black beans, cheese, or any number of other ingredients.

The seven new arepa restaurants that began operations this year are currently finishing a trial period which, according to Canan, has yielded very positive results.

“[F]rom January to date we have sold 693,000 arepas. Here, the savings for the people reach more than 70%. While capitalist arepas cost between 20 and 30 bolivars each, [our] socialist arepas cost 7.5 bolivars, covering production and labor costs”, the Commerce Minister said.

Maria Molina, a worker at the new restaurant in La Riconada which employs 23 others from the community, commented on the services being provided and the work environment of the new facility.

“I can say that this has really been a success. The people are very pleased. And those of us who work here, speaking for all of us, it gives us satisfaction. We have a really excellent work team and things have been really good,” said Molina.

The restaurant in La Riconada has been made functional with help and input from the neighborhood’s community council. The community councils are units of grassroots democracy that have been established all over Venezuela to foster greater participation from ordinary residents in the management and implementation of projects that impact their community.

The new arepa restaurants have also benefited from the collaboration of the National Nutrition Institute, which is helping to train workers on questions of sanitation and hygiene as well as nutritional standards for the products being offered.

“We guarantee food for our people”, Minister Canan said, adding, “and here we are proving it alongside the community councils and state institutions in order to ensure food security”.

Canan also pointed out that, rather than having to rely on imports to satisfy demand, all the food products that are being sold in the new restaurants come directly from Venezuelan domestic agricultural production.

In this respect, the Commerce Minister took advantage of his visit to report on other food security measures taking place in Venezuela, including the distribution of more than eight thousand tons of low cost fruits and vegetables to over 456 locations throughout the country.

“The reality is that the food we are producing in the 110 agroindustrial plants is being distributed to the people”, Canan said, referring to the media blackout that has accompanied the government’s work in guaranteeing food security.

In related news, the Minister for Land and Agriculture, Juan Carlos Loyo, reported on Sunday that milk production in Venezuela has risen by 50% over the past 11 years and is currently producing some 560 thousand tons.

According to Loyo, meat production has also increased 18% this year. “This year, we will produce 2.5 million tons of meat in Venezuela and this guarantees us a nationally produced supply of close to 78-80% of demand”, he said.

Loyo attributed these production increases to government efforts to strengthen the agricultural sector.

“Our agricultural policies are integrated and accompanied by laws which stimulate and aid our producers, such as the Land and Agrarian Development Law and the Agro-Alimentary Security and Sovereignty Law”.