Cleveland Scene: The Commies Next Door... 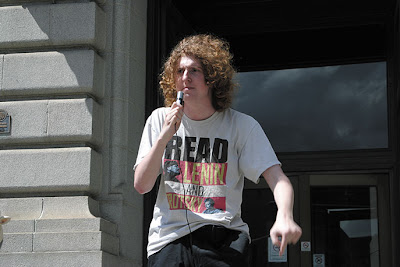 (from the latest issue of Cleveland Scene)

Caleb Maupin would like you to know he's not a super-villain, despite what you may have seen on TV. A communist? Sure. But he's not out to indoctrinate your children. Not yet.

The 22-year-old is chatty and affable, a skinny pale kid with a burning bush of unruly red hair. When it comes to talking politics, he's obviously done his homework: facts, dates, obscure legislation, the fates of forgotten labor leaders, snippets of protest songs — in conversation he drops all forms of arcana from the annals of the American left. In part, he's learned the game as a careful student of history, but he also sees himself as an inheritor of the radical tradition.

Maupin is the leader of a small group of like-minded communists called Cleveland FIST, the local arm of a national youth organization. Maupin's sidekick is Adam Gluntz, a stocky blond philosophy student from Baldwin-Wallace College. Together, they're a straight-faced Laurel and Hardy of liberal radicalism: two white guys from suburban and rural backgrounds who have inserted themselves at the forefront of the local far-left.

While most young Marxists may be content to rap about Mao in the dorm room between bong rips, these guys take a more sober and proactive approach to kick-starting their revolution. They attend nearly every public demonstration held in the area, from immigration rallies to protests against police brutality. This is not necessarily an easy world to inhabit: Far from big-budget political establishment, the radical left is a mix of old-school union types and inner-city activists, groups that can be distrustful of anyone new, mainstream, and — in many cases — white. But Maupin and Gluntz have quickly become fixtures in this crowd. By the end of the month, they plan to leave their Berea stomping grounds and move into a house in Collinwood. It gets them closer to Cleveland's working class — and to the scene of their first mainstream attention.

In mid-May, the pair got wind of a student walkout at Collinwood High School and showed up with a video camera in time to see two young girls arrested by Cleveland police. After their clip of the rough arrest went public, the TV news and community leaders suggested Maupin was some kind of agent provocateur out of a '50s comic book, orchestrating the protest and using the kids as pawns in his Marxist agenda.

"They acted like I was some communist Snidely Whiplash twirling my mustache," Maupin says. "We're trained in this country from the time that we're little to believe that communism is a devilish, evil ideology — that communists are all just big and scary — not to engage the actual political beliefs."

Maupin and Gluntz admit their group is small — fewer than ten active members — but the two aren't afraid to dive headfirst into the class and race issues still brewing in Cleveland. At times it seems they might be the only ones paying attention.

Maupin grew up in red, white, and blue-blooded Orrville, the oldest son in one of the only liberal families on the block. Politics was a common topic of conversation in the household, and a young Maupin got an early taste of the picket line when his mother and other Stark County librarians went on strike. As he got older, he spent most of his free time reading, eventually cracking open The Communist Manifesto in the fifth grade. Hooked on the message, Maupin read his way through other communist staples and began contacting local socialist groups about how he could get involved. By 19, he was a member of the Workers World Party, one of the largest communist groups in America.

In 2006, Maupin took up political science at Baldwin-Wallace. But once classes began, he became disappointed with the beer-bong dilettantism and unengaged attitude of most of the student body.

"I came to college because I wanted to learn — political theory, international politics, all of it. Other students weren't there to learn; they were there to get their grade and get a job . . . and they're going to be lucky if they have a job at this point," he says.

Shortly thereafter, Maupin met Gluntz, a B-W music student from Hudson. The two shared an interest in politics, despite Gluntz's conservative leanings at the time. They spent long nights talking politics at a nearby Denny's, and eventually Maupin drafted his friend into the communist ranks. Now boasting a Trotsky to his Lenin, Maupin founded the local chapter of FIST and dropped out of school to focus full time on activism.

Their timing may have been right on. Marxism today — more than two decades after the fall of the Berlin Wall — is enjoying a bit of a new vogue on the American scene. The philosophy has become the favorite boogieman of the right-wing media, and as anyone who's spent time at a Tea Party or two can tell you, the denizens of that particular corner of the spectrum are convinced that Obama has swapped every Bible in the White House for a copy of Das Kapital.

Despite the negative attention, socialist groups believe their message is ripe for the times. Tagging the Great Recession as the endgame of the capitalist project, they claim they've seen fresh interest in socialism and Marxist theory, especially among young people who've come of age amid bank bailouts, a manic stock market, and record unemployment.

Frances Dostal is one of the ideology's old-timers with confidence in a communist future, thanks largely to a new youth movement. Now in her eighties, she's spent the lion's share of the century working the frontlines of social causes from civil rights to the anti-war movement. Dostal says she's seen a growing number of younger socialists become involved in hard-hit Rust Belt cities like Detroit; she believes Maupin and Gluntz could be the spark of a wider local resurgence. "[Maupin's] energy is just incredible," she says. "I have hopes they'll continue to bring in interest."

Maupin and Gluntz say their presence in Cleveland's inner city and working classes has drummed up curiosity in their philosophy. There are obstacles, they admit. For one, they say many in the working class don't see that liberal political organizations and unions have lost touch with the people they purportedly serve. Such groups, they believe, only lubricate the interests of the mainstream political and business machine.

"ACORN's goal is to get Democrats elected and raise money for the party," Gluntz says. "They may benefit people in the process, but ultimately their interest is for themselves. Their job is to capture people's anger they have about economic and political issues, and channel it into the party." He believes unions have fallen into a similar situation, with the ruling caste in bed with the bosses, rather than openly fighting for workers' rights.

"That's what being a communist is about: organizing our class — the working class — to organize along their own interests," he says.

That disconnect between liberal groups and the people they claim to serve may have been spotlighted with the Collinwood incident. On May 13, Collinwood students staged a walkout — a bit of social disobedience tied to recent budget cuts. Maupin and Gluntz say they were contacted before the event on Facebook by a student organizer. The pair attended in a show of support, but say they had nothing to do with the planning.

But while there, the two captured video of Cleveland police arresting two teenage girls, Destini and DeAsia Bronaugh, ages 19 and 17. The video shows four officers slamming the girls against a cruiser and dropping them face-down on the pavement. (The girls both face charges stemming from the incident.) Maupin and Gluntz took their footage to area TV stations; the next day, a protest was held outside the school calling for the Bronaugh sisters' release. TV crews showed up.

The WKYC report that ran later that day clearly suggests Maupin was the mastermind behind the events. Anchor Ramona Robinson says the protest included "some adults, whose motives for being there have been questioned." At one point in reporter Dick Russ' clip, Maupin is introduced with a slow-motion shot, as if he were an action-movie evildoer marching toward a showdown. The segment also includes clips of a clearly agitated Maupin denying any role in the walkout; nevertheless, Russ later mentions suspicions that the Marxists had "duped and manipulated the Collinwood kids."

Community leaders echoed the accusation. In the segment, NAACP Executive Director Stanley Miller states that he thought "there are some other people out here with different intentions that are trying to take advantage and direct the thinking of these kids. And that's a problem."

Maupin believes he was fingered because the media and community leaders would rather blame a Red for the incident than talk about police brutality. Tina Bronaugh, the mother of the two girls, agrees.

"[The police] beat up my girls, they threw them in jail, and now they're putting them through these charges," she says. "I can't see how this goes on and nobody says anything. [Maupin] saw something that was unjust, and he stood up," she says. "I don't see a lot of other people doing that here."

Send feedback to kswenson@clevescene.com.
at 5:12 AM