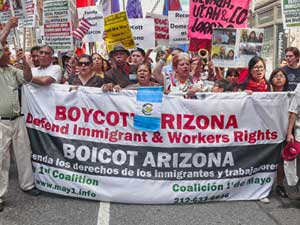 Despite a continuous onslaught of attacks against immigrant workers, resistance and opposition continue to grow in the U.S. — not only against Arizona’s Senate Bill 1070, but also against the entire campaign to criminalize and drive workers born outside this country underground.

In the month of July alone, there were not one but many national actions in Washington, D.C. Organized by different sectors of the movement, they included Arizona but focused on other immigration issues as well. These actions included militant civil disobedience by undocumented students in support of the DREAM Act, who, risking deportation, boldly carried out actions directly at the center of power in this country.

National days of actions, in solidarity with the people of Arizona and against SB 1070, are taking place in cities across the country on July 29 and 30.

The danger exists, however, of all attention being turned on SB 1070 while ignoring other just as dangerous — if not more ominous — measures, such as President Barack Obama’s “Secure Communities.” And SB 1070 must not sideline condemnation of Senator Charles Schumer’s plan on immigration either.

Washington has clearly lacked the political will to meet the demands of the movement for immigrant rights. Instead of granting well-deserved legalization and pro-worker, comprehensive immigration legislation, the White House and Congress deliberately handed over immigration policy to the states. Piecemeal congressional immigration policy paved the way for Arizona’s SB 1070.

SB 1070 takes place in the wake of the “funnel effect,” where the militarization of the 2,000-mile southern U.S. border by President Bill Clinton and his successors forced migrants to cross through not only one of the hottest areas of the Southwest, but also one of the most conservative. U.S. policies dared migrants to cross into hated racist and neo-fascist “Sheriff Joe Arpaio country.”

Nonetheless, as attacks continue in Arizona and around the country, the movement strongly demonstrates the adage “repression breeds resistance.” This righteous mood of indignation and level of organizing could bode well for May Day 2011.
Boston, July 10.

Not only in Arizona

After 2006 — and the massive immigrant rights demonstrations that took place across the country — both the Bush and Obama administrations imposed policies on immigration that went against the movement’s demands.

Immigration policy was outsourced to state and local law enforcement agencies through a federal program called 287(g). This program deputized local authorities as federal immigration agents, giving them carte blanche to go after immigrants and workers of color.

A New York Times editorial notes that “a new report by the inspector general ... paints a portrait of 287(g) agencies as a motley posse of deputies who don’t know Spanish, who don’t know or care about the dangers of racial profiling and who operate well beyond the control of the federal agency that they are supposed to be working for.” The report warned that 287(g) laid the basis for civil right violations. (April 8)

Another, even more ominous policy is quietly being applied in cities across the country.

In April and July, CounterPunch published two informative articles: “Why Obama’s ‘Secure Communities’ Program May Be More Dangerous Than Arizona” by Stewart J. Lawrence and “It’s Not Just Arizona” by Bill Quigley.

The articles correctly describe the creeping danger of what Lawrence described as “one of the Obama administration’s most important and secretive immigration enforcement programs.”

Lawrence writes, “Known euphemistically as ‘Secure Communities,’ the program looks and sounds innocuous, and even beneficial.” But it is far from that.

He documents how the program has targeted “low-level misdemeanor offenders, including people who may be guilty of little more than running a stop sign or driving with a broken taillight.” Many of these people are innocent. “But,” writes Lawrence, “they are getting rounded up and processed for deportation just the same.”

The program began in North Carolina and Texas in October 2008. Now, more than 450 jurisdictions, in at least 24 states, are working with the Department of Homeland Security to implement the program. Lawrence notes that is more than six times the number of jurisdictions working under 287(g).

Quigley illustrates the heartbreaking and insidious application of Secure Communities with the case of Florinda Lorenzo-Desimilian.

He writes, “Lorenzo-Desimilian, a 26-year-old married mother of three ... was arrested in her home [in Maryland] by local police on a misdemeanor charge of selling $2 phone cards out of her apartment window without a license. ...

“Local police sent her prints to the FBI who in turn notified [U.S. Immigration and Customs Enforcement] that she had overstayed her work visa. Even though her three children are U.S. citizens, ICE kept her in jail for two days and is now trying to deport her.”

Secure Communities, he writes, is “really operating a dragnet scooping up and deporting tens of thousands of immigrants, like Ms. Lorenzo-Desimilian, who are no security risk to anyone.”

Quigley adds, “ICE says this program ‘supports public safety by strengthening efforts to identify and remove the most dangerous criminal aliens from the United States.’ However, ICE is not actually targeting convicted criminal aliens, dangerous aliens, or even violent aliens. They are targeting everyone.”

Other examples of the wrenching devastation of immigrant’s lives are laws such as that in Fremont, Neb. Amidst billboard campaigns that read “Stop the invasion,” the City Council passed legislation prohibiting the rental of homes to people without documents. 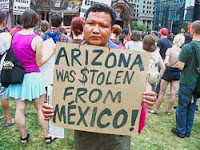 The week of July 12 a Utah state government worker released a list of about 1,500 immigrants’ names, along with their immigration status, address and date of birth to the media! Some of the names included women who had just given birth or were pregnant. This amounts to a Nazi-like reign of terror.

War on immigrants is war on workers

The state-applied immigration policies, the right-wing rhetoric and hysteria, coupled with the policies of the Obama administration, amount to a war on immigrants.

The Washington Post reported on July 26 that a record number of undocumented workers have been or will be deported. It wrote that the Obama administration expects to deport about 400,000 workers this fiscal year — “nearly 10 percent above the Bush administration’s 2008 total and 25 percent more than were deported in 2007”!

One of the principal ways these deportations have occurred merits a full campaign by every single union in this country.

The Post writes: “The Obama administration has been moving away from using work-site raids to target employers. Just 765 undocumented workers have been arrested at their jobs this fiscal year, compared with 5,100 in 2008, according to Department of Homeland Security figures. 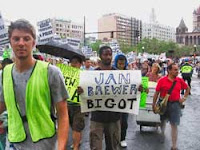 “Instead, officers have increased employer audits, studying the employee documentation of 2,875 companies suspected of hiring illegal workers and assessing $6.4 million in fines.”

This policy, called “velvet deportations” by some and “silent raids” by others, is in response to the economic crisis that is sweeping the world. If labor does not respond to these deportations, 287(g) and Secure Communities not only will devastate immigrant communities, but will continue to undermine union drives and campaigns to raise wages. Furthermore, it will exacerbate tensions and racism, instead of fostering solidarity and unity — the main tools for winning workers’ demands.

Stopping 287(g) and Secure Communities should be one of the main demands of the Oct. 2 March on Washington for jobs that is being organized by sectors of the labor movement and the Black community. The immigrant rights movement should mobilize for this demonstration.

An important anti-war conference took place in Albany July 23-25. The immigration struggle had a significant role there. This alliance-building is key to building the anti-war movement as well as advancing the immigrant rights struggle.

Immigration policy is clearly an anti-war issue, as Predator B drones — the same ones used by the CIA in the Middle East — are now patrolling the U.S./Mexican border. The militarization of the border is an act of war, not only on the people south of the border, but on all decent-minded people.

The Albany conference voted to hold spring anti-war actions on April 9 instead of later in April, because it would have presented a problem if they took place closer to May Day. This solidarity and coordination by various sectors of the movement is a tremendous example of the kind of unity that is urgently needed in the face of all the assaults against the workers and oppressed of the world.

As fall and spring actions fill the calendar, perhaps a crescendo of movement will culminate on May Day 2011, where all sectors — not just the immigrant movement, but labor, anti-war and others — will march together in a splendid show of class unity.

In New York, the rallying cry will be “May Day where? Union Square!”

Articles copyright 1995-2010 Workers World. Verbatim copying and distribution of this entire article is permitted in any medium without royalty provided this notice is preserved.
at 8:07 PM