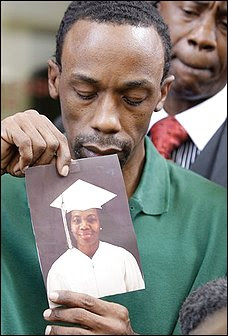 HOUSTON -- Imprisoned for 27 years for a rape he didn't commit, Michael Anthony Green walked out of jail a free man on Friday and in the process was able to leave behind some of the anger that had fueled his survival behind bars.

Accompanied by his attorney, Green walked out of the Harris County Jail and into the arms of about 20 family members who cheered him.

"Live life," Green said, when asked what he is going to do now.

Green, 44, was released after the Harris County District Attorney's Office reopened his case and new DNA tests it commissioned showed he did not commit the 1983 rape of a woman who had been abducted. During a court hearing Friday, a judge ordered that Green be released on a $500 bond, allowing him to be free while the Texas Court of Criminal Appeals makes a final ruling on his innocence.

Asked what kept him going the last 27 years, Green said that in part it was his anger.

"I took and channeled my anger into studying the law," said Green, clutching a photograph of his mother, who died while he was in prison. "That's how I lived, day by day ... doing what I did. Get up in the law, try to find me a way out."

Some of the anger that Green had held onto for so many years came to the surface on Thursday, when he had been originally scheduled to be freed on bond. His release was delayed to give him time to calm down after he became upset that he was put in handcuffs and leg restraints one final time as he was taken from the county jail to the courthouse, said Bob Wicoff, his attorney. Green said he got upset because one of the deputies escorting him tightened his handcuffs and threatened him.

Wicoff called it a misunderstanding but said Green was justified in his anger as his life had been taken away. Green entered prison at age 18. Some of the nieces and nephews who greeted him on Friday hadn't been born when he was locked up.

Green said that while in prison, he didn't give up hope, writing to state lawmakers, the Harris County District Attorney's Office and others proclaiming his innocence and asking that his case be reviewed.

In 1983, four men abducted a woman from a pay telephone in north Houston, taking her to a remote location where three of them raped her. The men drove off, leaving the woman there, and were later chased by police. The men abandoned their car and fled on foot. Green was detained by officers that night as he walked in the area.

The victim could not identify Green in person when he was first detained but later picked him from a photo lineup as one of her attackers. Green was convicted of aggravated sexual assault and sentenced to 75 years in prison. He was the only person convicted in the case.

After District Attorney Pat Lykos was elected in 2008, she formed the Post-Conviction Review Section and it chose Green's case as one of the first to look at. The review team found the only remaining evidence in the case - clothing worn by the victim during the rape - and had it tested. The results excluded Green.

Authorities were able to identify the four men who abducted the women. But because the statue of limitations on the rape has run out, they cannot be prosecuted.

Lykos declined to criticize her predecessors when asked why it took so long for Green's case to be reviewed. She said DNA testing was not available when Green was convicted, it didn't come to the forefront until the 1990s and that even now Harris County - the country's third-largest county - doesn't have the resources to do all the testing it needs to do.

Green said he was grateful for the efforts by the district attorney's office.

He and his attorney blame bad police work for his wrongful imprisonment, saying improperly suggestive identification procedures that were used in photo spreads and a live lineup helped lead to the victim incorrectly identifying Green as one of her attackers.

Houston police have declined to comment on Green's case.

Wicoff said Green forgives the victim but is unsure if he will ever forgive the police.
Adrian Taylor, 50, Green's older brother, said he's disappointed it took so long for his brother to be released but now he wants to help him look to the future.