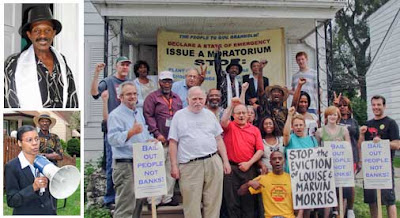 A protest on July 22 to stop the foreclosure of Marvin and Louise Morris turned into a victory celebration after their mortgage servicer finally agreed to allow the elderly couple to remain in their modest Detroit home.

The Morrises had fought in the court system for several years to keep their home after becoming victims of racist subprime predatory lending. At every turn they faced defeat — even the Michigan Supreme Court refused to hear their appeal.

The Morrises had paid monthly into an escrow account that totaled more than the value of their home, but Barclays Bank and HomEq refused to settle the disputed arrearage on the mortgage.

When the Morrises faced imminent eviction from their home of 32 years, activists with the Moratorium NOW! Coalition to Stop Foreclosures, Evictions and Utility Shutoffs called a demonstration and put out an e-mail blast to thousands of people around Michigan and throughout the country, asking for calls and e-mails to HomEq to demand they stop the foreclosure.

In less than 48 hours after the demonstration, attorneys for HomEq contacted the Morrises’ attorney, Vanessa G. Fluker, and agreed to work out a settlement that would allow the Morrises to keep their home.
— Kris Hamel
at 6:06 PM