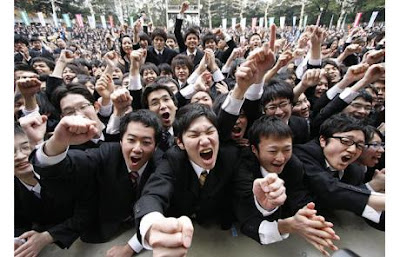 Japanese turn to communists in downturn
Millions of Japanese salarymen, whose fathers and grandfathers initiated this nation's economic miracle, are fully aware that the chaff has already been winnowed out of the domestic workforce.

From: The Daily Telegraph

They have seen the part-time employees clock out one last time and the foreign labourers' contracts not renewed. They know there is no staffing fat left to trim and have seen the axes beginning to fall in companies where previously the dark-suited salaryman has been untouchable.

"It's very hard right now," says Keisuke Obata, a 42-year-old employee of a major manufacturing company based in Tokyo. "I've never seen things so bad, and all we hear from the company and the politicians is that we have to try a little harder and endure for a little longer."

Obata has been on a reduced working week since January, has seen his pay cut and his summer bonus similarly shrivel. The company is appealing for people to take voluntary redundancy.

"It makes you think," he admits. "But there are not many other jobs out there and I have commitments."

Men like Obata, who has given two decades of service to his company yet is on the verge of being summarily dismissed, are finding their previously unswerving commitment to their employers eclipsed by the instinct for self-preservation.

With a mortgage and three young children to provide for, Obata has heard the message that has gradually spread across the shop floor and entered the domain of the white-collar workers. Communism, they say, might just have the answer.

"Companies are only interested in their profits and protecting their management," says Tatsuya Yoshida, an employee of a Tokyo-based transport company. "They do not care about their staff. They see us as disposable."

The junior member of the two-party coalition with the Liberal Democratic Party, it draws its support mainly from the ranks of the Sokka Gakkai Buddhist organisation and is presently the third largest party in the Japanese Diet.

According to the latest opinion polls, however, it has been overtaken by the Japanese Communist Party. And workers like Yoshida are doing all they can to spread the word.

"I used to have pressure from my family to vote for New Komeito, but Japan needs real change and I've had enough of politicians making promises that they soon break," he says.

Yoshida ticks his main concerns off the fingers of his left hand: protecting his job, ensuring his two sons have enough money to go to a good university, ensuring that everyone has a minimum standard of living and protecting Article 9 of Japan's constitution, which renounces war.

Other parties have made those promises, and more, in opposition, he points out, but "forgotten" them as soon as they are in a position of power.

"The opposition is effectively a pseudo-LDP and even if they do win the next election I see no chance of improvements in the political, economic or social situation in Japan," Yoshida says, pointing a finger at the Democratic Party of Japan until recently headed by a former LDP politician who was forced to resign for taking illegal donations from a construction company.

"How can we trust these people with our futures?," he said.

"People are coming to us because the JCP does not accept donations from companies or organisations," says Yoshida. "That is why we can speak out against big corporations."

And despite sticking to its principles on donations, the JCP is the second-best fund-raising party in the country. Only the ruling LDP does better.

Rampant corruption combined with the spiralling unemployment caused by the global economic downturn has given the party a huge new support base.

Party officials say that more than 14,000 people have joined the cause in the last 18 months, a quarter of whom are under 30. Similarly, circulation of the party newspaper, Akahata (Red Flag) has risen to 1.6 million copies.

The LDP, on the other hand, has seen its membership collapse from a peak of 5 million to just 1 million today.

"Many workers are being deprived of the right to work with dignity," Kazuo Shii, the charismatic 54-year-old chair of the JCP, told a press conference in March. "This is the cruelest form of behaviour under 'capitalism without rules.'

"Most people working on temporary contracts are disposable workers, forced to endure exploitative and unstable working conditions as well as discrimination," he said, describing conditions as "a revival of slave labour and a modern-day form of cruelty."

"I am indignant that temporary workers are being forced to toil in such inhumane conditions at corporations such as Toyota and Canon," he said.

According to the party, the number of workers earning less than Y2 million (£13,885) a year has risen to more than 10 million.

This increase in grass-roots support has been boosted by a manga version of Karl Marx's "Das Kapital," which sold more than 6,000 copies in the two days after it was released in December, and revival of interest in a 1929 novel titled "Kanikosen" that told of a rebellion among workers on a crab processing ship off northern Japan.

Despite the recent surge in its fortunes, Shii and his supporters accept that the JCP will not have a majority in the Diet in the near future. They will fight the national elections, of course, but they are focusing much of their attention on winning hearts and minds at the local level.

"In general, Japanese people do what they are told by more powerful people," says Yoshida. "We do not want to cause disharmony with the people around us. So we obey when we are told what to do and do not give our own opinions. This is why we have the same political parties running the country since the end of the war.

"Even though the communists only have 3.3 per cent in the latest opinion polls, more than 31 per cent of the people said they were undecided," he points out. "We aim to increase our support one vote at a time and we want our politicians to tell the Diet what the people are really thinking."

The approach is showing signs of working; in late April, JCP candidate Hiroshi Shikanai was elected mayor of the city of Aomori, overcoming his LDP opponent and incumbent.

A key issue in the campaign was the state of the regional economy, which will undoubtedly be at stake again when the country goes to the polls in the next few months.

Keisuke Obata has cancelled his plans for a trip to Hawaii with his family later this year and is instead planning to take them on a camping trip by the lakes around Mount Fuji.

He said he was looking forward to some time away from the office and a little peace to contemplate his future, both professional and political.
at 6:08 PM