Whose Plants? Our Plants! 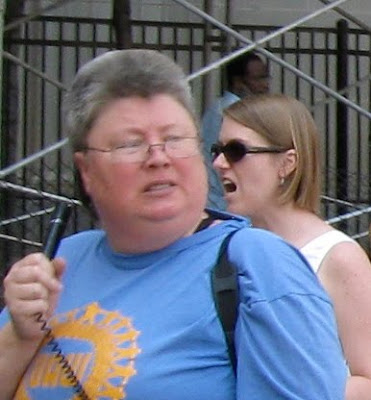 The United Auto Workers union, whose 35th Constitutional Convention begins June 14, is celebrating its 75th anniversary this year. “I think we’ve hit bottom,” stated outgoing President Ron Gettelfinger. (Detroit News, May 28) He was referring to the union’s precipitous decline in membership — from 1.5 million at its peak to 750,000 in 2001 to less than half that today.

Gettelfinger’s growth prediction is based on thousands of new workers joining the UAW when General Motors, Ford and Chrysler hire workers making $14 an hour. Beyond that, it’s hard to imagine workers wanting to join the union whose future members will, by Gettelfinger’s own admission, not earn enough money to afford a new car.

To engage potential new members — and renew union interest among the rank and file now — the UAW must restore the traditions of its heroic past.

In 1937, after a 44-day occupation of GM plants in Flint, Mich., the UAW won recognition as bargaining agent for the workers. Membership soared. That year there were over 500 sit-down strikes. Charged with illegally seizing private property, unions argued that they were protecting their property rights — they owned their jobs. Yet in 1938 Congress voted to make sit-down strikes illegal.

Although the 1938 law has never been tested in court — and could be by raising the job as a property right — in modern times new legal arguments have been raised to empower workers to take over plants.

The Pittston Coal strike, which began April 5, 1989, is an example. Members of the United Mine Workers of America defied Taft-Hartley injunctions limiting pickets, drawing mass arrests and fines of millions of dollars. The strike’s militant, creative tactics attracted worldwide attention; supporters from all over came to “Camp Solidarity.” Yet the company was intransigent in its demands that the union make concessions.

On Sept. 17, 1989, ninety-eight miners and an allied clergyman approached two security cops guarding Pittston’s Moss Number Three processing plant. “We are an unarmed, nonviolent inspection team of stockholders coming to inspect our investment,” they said. (Jeremy Brecher, “Strike”) The guards departed and the miners — all of whom owned at least one share of Pittston stock — occupied their “investment” for four days. None were arrested.

The takeover — called “Operation Flintstone,” to honor the heroes of Flint — marked a turning point in the strike. On Dec. 31 miners approved a settlement that had almost none of the givebacks of Pittston’s “final offer.”

If UAW workers at Chrysler, Ford and GM attempted a similar “Operation,” they would have a stronger legal case than the UMWA did. They could argue that they are defending the part of the company owned by a fund, set up in 2007, for their retiree health care.

The Voluntary Employee Beneficiary Association was a concession, allowing a fixed contribution from the auto companies to free them of future so-called “legacy costs.” The UAW took a risk that the fund might run dry. Last year, in the deal to rush Chrysler through bankruptcy, the Treasury Department ordered the union to take half the contribution in company stock — which gave the VEBA a majority stake. The VEBA, however, was allowed to appoint just one member to the New Chrysler board of directors. All the VEBA’s equity is in nonvoting stock.

Minority shareholder Fiat, the government and the lenders — not the UAW — run Chrysler. Contrary to Glenn Beck and Rush Limbaugh’s rants, this state-imposed gamble was not a good deal for autoworkers.

Nevertheless, the VEBA’s majority stake could be a powerful legal defense if workers took over the fund’s assets — their plants. Just as pensions represent deferred wages — as courts have ruled, for labor already performed — the VEBA represents deferred benefits. Like the pension fund, it — 55 percent ownership of Chrysler, 17.5 percent of GM and an unspecified percentage of Ford stock — belongs to the workers. The UAW also claims GM is withholding $450 million owed to the VEBA. That’s over 10 times the amount that closed plants of recently bankrupt companies have been selling for. As a creditor the workers could claim the right to seize the assets of their delinquent debtor.

Workers everywhere were inspired by the United Electrical workers’ 2008 takeover of Republic Windows and Doors. The company violated the workers’ legal rights by not giving 60 days notice that the plant would close. President-elect Barack Obama sanctioned the action.

In the economically important auto industry, a sit-in would have a larger impact. The UAW would gain respect and attract workers in need of union representation. The rank and file would take pride and volunteer to help rebuild it as a fighting labor organization. When workers stay in they have more power; even in hard economic times a company cannot easily bring scabs into an occupied plant.

Another “Flintstone” would put the now-profitable companies on notice. No more substandard wages! We want back everything we gave up and we want our plants kept open. If there is insufficient demand for vehicles, why not use idle plants to supply the “green” economy? They could easily be retooled to build buses, wind turbines and solar panels.

A dramatic action like a sit-down requires preparation — logistical, legal and psychological. Why not start the process at the Convention, which will draw delegates from every local in the country?

“Flintstone” is also a hard, fine-grained quartz that sparks when struck. Now is the time — ignite the spark!
at 4:34 AM