From: Fight Back News!

Newark, NJ - The Community Coalition against Foreclosure and Homelessness rallied here, May 22, to demand that effective measures be taken by government to help victims of the housing bubble. Coalition members include the People’s Organization for Progress (POP), the Newark Teachers’ Association (NTA) and New Jersey Citizen Action (NJCA). In all there were 12 organizational sponsors.

Essex County, Newark’s location, is one of the most badly hit areas anywhere. Debby Strong, the moderator for the day, read a People’s Program that was developed during preparation for the event.

Darrell Graham of POP said, “People are being used for their own self-destruction. Poverty leads to survival being seen in terms of guns, drugs and mayhem. It’s being used for gentrification. One side of the street pays no rent,” he said, meaning the office towers surrounding the site, “while the other side is being evicted.”

Cynthia Mosley of the Parent Advisory and Service Academy told the gathering ,“There are 5000 homeless children in the Newark Public Schools, automatically depriving them of education. Homelessness leads to gangs for survival with guns and violence. We have to come together as a community to do something about it.”

Lisa Davis of the Coalition spoke of plans to present a People’s Hearing. “We’re going to get the Fed in here and the bank CEOs and face the problems our community is having. We will seek our own agenda. We need to come together and stick together.”

New Jersey’s veteran labor-oriented singing group, the Solidarity Singers, mocked the capitalists’ habit of blaming their own victims with the song, Hallelujah I’m a Bum!

The gathering marched to Newark’s main crossing at Broad and Market to the accompaniment of a group of African drummers. It paused at a branch of Bank America. Solidarity Singer’s Ben Zurofsky offered remarks about the impact of service budget cuts and hospital closings. “The banks are made of marble, with a guard at every door,” they sang, and the march proceeded to the Essex County Courthouse under the gaze of a statue of Abe Lincoln.

Brenda Roberson, who was driven onto the streets in the 1990s by housing speculation backed by City Hall, told the rally of her experiences and said that everyone must work together to end these abuses. Leila Amirzadeh of NJCA talked about the housing scams that have sprung up in the wake of the housing bubble and how to avoid them.

Protest organizer David Hungerford provided some analysis: “The housing bubble was a period of time, from 1999 to 2007, when houses were sold for more than they were worth. The root cause was capitalism. It is a chaotic social system. A factory worker creates $10 or $11 or $12 of value for every dollar of wages. The masses don’t have enough money to buy back all the stuff they create. Inventories pile up and frequent crises result.”

“But the capitalists also accumulate so much money in the process they can’t put enough of it back into capital, given the narrow limits of the capitalist market system. Speculative bubbles are the result. The housing bubble was the largest bubble and the largest swindle in history, so big it brought the entire US financial system down.”

“The capitalists forced somewhere between $1.5 and $2 trillion of excess capital into the mortgage market. Young people kill each other in the streets to survive, school buildings are literally falling down, there are 40 million people in the United States who don’t even get enough to eat, and the capitalists can do nothing better with all that money than create the biggest swindle in history. It will always be like that until the people overthrow capitalism and abolish it,” Hungerford concluded.

Jimmie White, a college student, pointed out the need of jobs for youth. He grew up seeing violence in the street and police violence and people need to put pressure on politicians to do something to help the people to end these problems.

Larry Adams of POP and the Bail Out the People movement talked about the history of struggle against foreclosures in the Great Depression, when hundreds of thousands of families were evicted. In response, the Unemployed Councils, set up by the communists, who he called “real heroes and sheroes of the people,” moved 77,000 families back into their homes. We need to bring the struggle back to that level.

Willa Cofield compared the campaigns of lies of the banks telling people houses were worth more than they were to the campaign of lies against Saddam Hussein to set up the invasion of Iraq, “His real crime was to nationalize Iraq’s oil in 1972, and to be the strongest voice for the Palestinian people among the Arab governments. Just as the government supplied huge amounts of money to bail out the banks, the war in Iraq has cost $900 billion. We think it is bad that the U.S. has lost 5000 lives, but 600,000 people have died in Iraq and the war in Afghanistan is lost. The U.S. has no right to invade other countries just because it doesn’t like their leaders. The U.S. must leave Iraq and Afghanistan immediately and without conditions.”

Jakada Khalfani, age nine, said “They teach us all this misinformation.” He said New Jersey Governor Christie is doing all these budget cuts while all the money goes to wars and other things that are not even necessary. He said that money comes from the people and it needs to be taken to places where people are homeless and need education.

POP Chairman Lawrence Hamm, arriving late from a labor rally, said 35,000 people had rallied in Trenton, the state capital, to protest budget cuts by Governor Christie. Unions, civil rights groups and community groups had come together to protest the anti-worker, anti-poor and anti-people budget cuts, imposed even as Christie refused to raise taxes on the rich. He said that the foreclosure crisis was the worst loss of wealth for black people since emancipation. Of two million homes lost in the foreclosure crisis, a million belonged to black people, who tend to have most of their wealth tied up in their houses. Poverty leads to crime, which leads to involvement with the police, which leads to police brutality.

He criticized full page ads in newspapers that made scapegoats of teachers for the salaries they are paid. “Personally,” he said, “I want my children in the hands of people who are well paid. I am comfortable with that. Let’s put the salaries of the corporate executives on the front pages!”

He said we have to get to the point where we can stand in front of the doors of people who are being evicted and prevent it. “‘Foreclosure’ does not convey what is happening,” he said, “what we are talking about is people being thrown out in the street.” He called for further work from the POP Committee against Foreclosure and Homelessness to develop this issue.

Earlier in the rally, Elizabeth ‘Bonnie’ Moore had told the rally of the murder of her son, Rasheed Fuquan Moore, at the hands of the Newark Police Department. With an air of controlled anger she related the appalling details of her son’s death, being shot 17 times as he sat in his car. She demanded the criminal prosecution of her son’s killers and of other police murderers by the State of New Jersey. “I’m going to see those cops go to jail if it’s the last thing I ever do,” she said.

Later she told Fight Back! that several people told her they were surprised that she did not cry while describing her son’s death. “Usually when I talk about him I get all choked up,” she said. “I didn’t even read anything off my paper, it all just came out.”

Asked why this time it was different, at first she said she did not know. Then she added, “Being there with other people and their problems had a lot to do with it.” 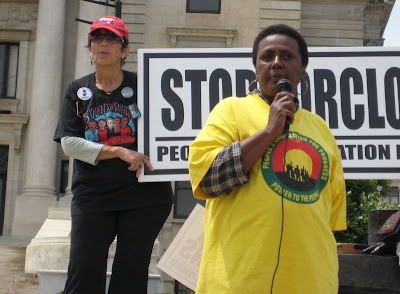