It was front-page news. General Motors, for the first time in three years, posted a profit — and no small profit. In January, February and March combined GM raked in $865 million.

Media analysts are quick to cite the drop in interest payments to GM’s lenders. Since cleaning out much of its debt in a government-orchestrated “quick rinse” bankruptcy, the company’s quarterly interest obligation has fallen from $1.2 billion to $337 million.

You would think this was the prime reason for GM’s speedy turnaround. No mention is made of the huge concessions — made while labor productivity soared and GM closed plants and cut the workforce by more than half — from the United Auto Workers. Yet it is by driving down the cost of labor power that profits — including the segment gobbled up by the banks and other bondholders — are increased.

GM cried poverty in 2005 and again in 2007, and during last year’s Chapter 13 bankruptcy threatened Chapter 7 liquidation. Each time, GM was able to squeeze huge wage and benefit cuts from UAW workers. Break time was shortened and a paid holiday was taken away. The givebacks, especially the most recent contract modifications, represent a huge transfer of wealth from labor to capital.

Similar contract changes were obtained during the Chrysler bankruptcy, which was portrayed as a dress rehearsal for GM. They went beyond concessions at Ford, which did not undergo bankruptcy. Last fall workers at Ford voted down the GM/Chrysler pattern, which took away the right to strike when the current contract expires in 2011, by a 4-to-1 margin.

UAW President Ron Gettelfinger and Vice President for Ford Bob King pitched the concessions as necessary to make Ford competitive. The day after the “no” vote, Ford reported a third-quarter profit of more than $1 billion. The company’s profits for 2009 came to $2.7 billion and were $2.1 billion for the first quarter this year.

Even Chrysler has improved its cash position dramatically, posting marginal first-quarter losses, and then only after taxes and interest payments were deducted from “operating profit.”

Prior to GM’s announcement, former White House “car czar” Stephen Rattner hinted that GM would have positive news. Rattner hailed the work of the Auto Task Force in crafting the deal that allowed auto companies to reap profits when the seasonally adjusted annualized rate of car sales hovers around just 10 million per year — compared to over 16 million before the recession. Before, the decrease in sales income and increase in cash incentives generated a negative cash flow.

This capitalist milestone was only reached by paying workers less while increasing the hours of work.

It should be expected that the UAW would insist, at a minimum, on getting back everything workers gave up prior to the GM and Chrysler bankruptcy. “When there’s equality of sacrifice, there’s got to be equality of gain,” stressed Bob King, who is expected to replace Gettelfinger at the UAW convention in June. “We just want to make sure when things turn around we share in the upside,” he said during a speech to executives and analysts. (New York Times, May 12)

There is no “equality of sacrifice” under capitalism. Over the past three decades autoworkers have made concessions in every single contract. Yet even when profits take a beating, executives collect millions in salaries, bonuses, stock options and other perks. In good years and bad, untold billions in interest and “servicing” fees have filled the coffers of JPMorgan Chase, Goldman Sachs, Citibank and their cohorts — no concessions there!

Thus far the companies have offered the workers nothing in the way of gratitude for their sacrifices. On the contrary, the restored liquidity of the Detroit Three has only whetted their appetites for a deeper plunge in the price of labor power.

For the UAW, one of the most humiliating concessions of 2009 was the freezing of wages of all future employees, other than skilled trades, at $14 per hour until 2015. This is only 1.25 times the federal poverty rate for a family of four. Now that the “traditional” UAW workforce has been cut to the bone, it is expected that thousands of workers will be hired at the below-union-scale wage. “That’s where the big economic gains would come, said Aaron Bragman, an analyst with research and consulting firm IHS Global Insight in suburban Detroit.” (Cleveland Plain Dealer, May 17)

Two-tier: a menace to all labor

In 1983 a new phrase was added to the lexicon of collective bargaining: “two-tier.” That year American Airlines and two unions, the Air Line Pilots Association and the Transport Workers Union, ratified a contract allowing the company to cap wages of new hires at a rate much lower than what then-current employees made. Within three years all but two airlines — two whose overall pay scale was below average — had gotten workers to agree to the two-tier structure. By then 10 percent of all union contracts — with the next big wave occurring in the grocery industry — had this major concession.

Two-tier pay was a big win for the bosses, who for the first time in decades saw average labor costs go down. For the labor movement, however, it is a poison pill that has dragged down the overall union pay scale and has sown division among workers making unequal wages for identical work. All too often, union leaders have become the salespeople for concessions such as two-tier, advancing them as necessary to keep a company or an industry “competitive.”

For members of the UAW, who are commemorating the union’s 75th anniversary this year, the dual pay rate virus began infecting their contracts in the 1990s.

The setback at Caterpillar had a domino effect. In 1999 Ford and General Motors spun off their parts divisions, creating two new but dependent companies, Visteon and Delphi. Later, with the cooperation of the UAW leadership, those companies were able to get workers to swallow two-tier. The same happened at American Axle, an earlier GM spinoff. At all three companies new hires’ pay was frozen at around $16.50 an hour.

In 2005, after the company declared bankruptcy, Delphi boss Steve Miller threatened to drive down the hourly rate for production workers to $12 or lower and all but eliminate pensions and benefits — and to close more than 20 plants. Fearful for their future, the majority of the higher seniority workers took retirement buyout packages.

By 2007 bottom tier workers were the majority at Delphi and voted for a one-tier contract that raised their pay but eliminated the higher pay scale. Later that year UAW members at Ford, GM and Chrysler agreed to their first two-tier contract — although a sizable minority voted no. In 2008, after a hard, three-month strike, American Axle workers making the higher rate took pay cuts in the range of $10 per hour.

Two-tier wages — which have dragged all wages down — have created what would once have been an oxymoron: low-wage autoworkers. Their numbers will increase as the Detroit Three replace workers who, uncertain of their future or unable to relocate after a plant closing, have taken incentive packages designed to get them to quit or retire.

Many of these new hires will be young and many will be workers of color and women workers. As profits rise, anger among all workers will grow as the spread of substandard wages combines with line speedups and demands for more work. If the capitalist economy shows signs of even a temporary recovery and thousands are hired, economic confidence could spawn a rebellious attitude in the plants, especially with young workers.

The UAW needs to undergo a radical change, or its numbers will continue to plummet and workers will see the union as irrelevant or unnecessary. Business unionism must go. The militant tradition of the sit-downs of the 1930s and the lengthy, valiant strikes of the following decades must be revived.

In 2007 the United Food and Commercial Workers won a contract with California grocers that raised wages for lower-paid workers and ended two-tier. Storeowners were not eager to suffer a repeat of the grocery strike of 2005.

King’s comments, however weak or misplaced, open up the possibility of a revived class struggle in auto. High on the agenda at the UAW Convention in June in Detroit ought to be this basic demand: “Equal pay for equal work — union wages for all.”

Martha Grevatt has worked 22 years for Chrysler in Twinsburg, Ohio. Her plant will close in July. E-mail: mgrevatt@workers.org. 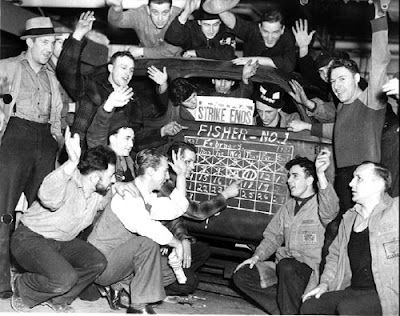