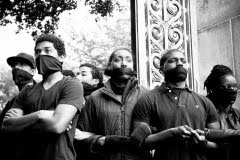 From: Fight Back News
http://www.fightbacknews.org/2010/3/2/education-struggle-heats

Los Angeles, CA - As the March 4 Day of Action draws closer, campuses across California are getting restless.

The latest series of struggles began Feb. 24, on the campus of UC Irvine. That morning, a group of about 20 students and workers took over the campus administration building. The action began as a sit-in, but by noon students had locked down the building and barricaded the entrances with dumpsters. Their list of demands included a revocation of the 5% furloughs imposed on service workers, financial aid for undocumented students and greater investment in ethnic, queer and women's studies programs. Police dismantled the barricades by the afternoon, and students were released after being briefly detained.

That night, some 250 students at UC Berkeley took over Durant Hall, a building which used to house the East Asian Library, and more recently became the site of one of the administration's ‘capital projects.’

In a statement, the occupiers linked the expansion of capital projects which serve only the administration with the rapidly rising student fees: "As we now know, the UC administration has used not only students' tuition, but also the promise of future tuition increases, to secure the bonds and bond ratings necessary to channel ever increasing resources into construction projects. They will always need more money, and it will always be our money. A general concern that changes the way we see the campus that surrounds us. But if there is one building in particular that exemplifies this process, it is Durant Hall: its renovation was halted in 2008 for lack of funds, and only started up again after the administration sold $1.3 billion in construction bonds last May backed by our fee hike as collateral. Its melancholy fate is to become yet another administration building. Durant Hall will be inhabited by deans and staff of the College of Letters and Science, but it has already been occupied by a bloated administration with private capital on its mind."

Students occupied the building for several hours before beginning a rowdy march down Telegraph Avenue, the heart of Berkeley's downtown. Demonstrators scuffled with riot police before dispersing and at least two were arrested.

On Feb. 26, students led by the Black Student Union at UC San Diego and the Afrikan Student Union at UCLA staged sit-ins at the offices of their respective chancellors. Several hundred students mobilized, demanding that the administrators take action to improve the conditions on campus for non-white students. The actions were prompted by a string of racist incidents at UC San Diego, but protesters also drew connections between the ongoing budget cuts and the plight of students of color. Students at UCSD occupied their chancellor's office for more than six hours before leaving.

On March 1, the UC Berkeley Black Student Union organized a silent protest in solidarity with the San Diego action. Students blocked one of the main gates on campus, dressed in black, with black cloth tied over their mouths.

On March 2, members of UCLA's Afrikan Student Union and allies took over a major campus walkway with linked arms and megaphones, chanting at the passers by and denouncing hate crimes and a lack of diversity in the UC system. At Berkeley, another series of banners urging students to strike have gone up.

We can only guess what tomorrow will bring.
at 3:51 AM