"We Send Doctors, Not Soldiers" Reflection from Fidel Castro 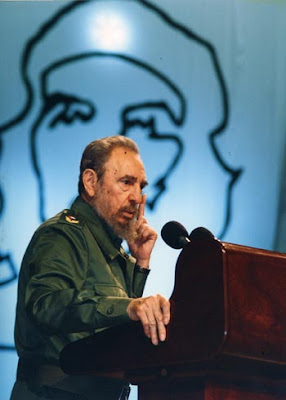 IN my "Reflection" of January 14, two days after the disaster in Haiti that destroyed that neighboring sister nation, I wrote: "In the field of healthcare and other areas, Cuba – despite being a poor and blockaded country – has been cooperating with the Haitian people for many years. Around 400 doctors and healthcare experts are offering their services free of charge to the Haitian people. Our doctors are working every day in 227 of the country’s 337 communes. On the other hand, at least 400 young Haitians have trained as doctors in our homeland. They will now be working with the reinforcement brigade which traveled there yesterday to save lives in this critical situation. Thus, without any special effort being made, up to 1,000 doctors and healthcare experts can be mobilized, almost all of whom are already there and willing to cooperate with any other state that wishes to save the lives of the Haitian people and rehabilitate the injured."

"The head of our medical brigade reported: "The situation is difficult, but we have already started saving lives."

Hour after hour, day and night, Cuban healthcare professionals began working nonstop in the few facilities left standing, in tents, parks or other open spaces, given that the population feared further aftershocks.

The situation was far more serious than was originally thought. Tens of thousands of injured people were clamoring for help on the streets of Port-au-Prince, and an incalculable number of people lay, dead or alive, beneath the rubble of clay and adobe with which the homes of the vast majority of the population were constructed. Even the most solid buildings collapsed. It was also necessary to locate the Haitian doctors who had graduated from the Latin American School of Medicine in the midst of destroyed neighborhoods, many of whom were affected, either directly or indirectly, by the tragedy.

United Nations officials were trapped inside their buildings and dozens of lives were lost, including those of several high-ranking officials of MINUSTAH– a United Nations contingent – and the fate of hundreds of other members of its personnel was unknown.

The disaster has shocked the world. People have been able to follow the situation via footage broadcast by the principal international TV channels. Governments from around the world announced the dispatch of rescue teams, food, medicines, equipment and other resources.

In accordance with the position publicly stated by Cuba, medical personnel from other nations – including Spain, Mexico and Colombia, among others – worked very hard alongside our doctors in facilities that they themselves had improvised. Organizations such as the PAHO, friendly countries such as Venezuela, and other nations supplied medicines and other resources. A total absence of egotism and chauvinism characterized the impeccable behavior of the Cuban professionals and their leaders.

As it has done in similar situations – like when Hurricane Katrina caused massive devastation in the city of New Orleans and placed the lives of thousands of U.S. citizens in danger – Cuba offered to send a full medical brigade to cooperate with the people of the United States, a country that, as is well-known, possesses vast resources but, at that moment, needed doctors trained and equipped to save lives. Because of its geographical location, the 1,000-plus doctors from the "Henry Reeve" Brigade were mobilized, with the necessary medicines and equipment, to leave at once for that U.S. city. It never crossed our minds that the president of that nation would reject the offer and allow a number of Americans who could have been saved to lose their lives. The error of that government was perhaps its inability to understand that the people of Cuba do not see the U.S. people as an enemy; nor do they blame them for the aggression our homeland has suffered.

Neither was that government capable of understanding that our country does not need to beg favors or pardons from those who, for half a century, have tried in vain to bring us to our knees.

Likewise in the case of Haiti, our country immediately responded to applications from the United States authorities to fly over eastern Cuba and other facilities that they needed to provide assistance as swiftly as possible to U.S. and Haitian citizens affected by the earthquake.

These practices have characterized the ethical conduct of our people and, together with their equanimity and determination, have been the constant features of our foreign policy. All those who have been our adversaries in the international arena know that only too well.

Cuba will firmly defend the opinion that the tragedy that has taken place in Haiti, the poorest nation in the Western hemisphere, represents a challenge for the richest and most powerful countries in the international community.

Haiti is a net product of the colonial, capitalist and imperialist system imposed on the world. Both slavery in Haiti and its subsequent poverty were imposed from abroad. The terrible earthquake came in the wake of the Copenhagen Summit, where the most elemental rights of the 192 member states of the United Nations were trampled over.

In the aftermath of the tragedy, a competition is underway in Haiti for the precipitate and illegal adoption of boys and girls, which has obliged UNICEF to adopt preventative measures against the uprooting of a large number of children, thus depriving close relatives of such rights.

The number of fatalities is already in excess of 100,000. An elevated number of citizens have lost arms or legs, or have suffered fractures that will require rehabilitation for tem to work or manage their lives independently.

Around 80% of the country will have to be rebuilt and a sufficiently-developed economy needs to be created in order to satisfy needs according to its productive capacity. The reconstruction of Europe or Japan on the basis of their productive capacity and the technical level of their populations, was a relatively simple task in comparison to the efforts that will have to be made in Haiti. There, as well as a large part of Africa and other areas of the Third World, it is essential to create the conditions for sustainable development. In only 40 years’ time, humanity will be comprised of more than nine billion inhabitants and will have to confront the challenge of climate change, which scientists accept as an inevitable reality.

In the midst of the Haitian tragedy, without anyone knowing how and why, thousands of U.S. marines, 82nd Airborne Division troops and other military forces have occupied Haitian territory. Worse still, neither the United Nations nor the U.S. government has offered any explanation to the world regarding this deployment of forces.

Various governments have complained that their aircraft have not been able to land and deliver the human and technical resources that have been sent to Haiti.

For their part, a number of countries are announcing the additional dispatch of soldiers and military equipment. From my point of view, such actions would contribute to creating chaos and complicating international cooperation, which, in itself, is complex. It is vital to seriously discuss this issue and entrust the UN with the leading role that corresponds to it in this delicate matter.

Our country is fulfilling a strictly humanitarian mission. To the extent of its possibilities, it will contribute the human and material resources at its disposal. The will of our people, proud their doctors and cooperative workers on vital services, is great and will rise to the occasion.

Any significant cooperation offered to our country will not be rejected, but its acceptance will be entirely subordinated to the importance and significance of the assistance required of the human resources of our homeland.

It is only fair to confirm that, to date, our modest aircraft and the important human resources that Cuba has placed at the disposal of the Haitian people have arrived at their destination without any difficulty whatsoever.

We are sending doctors, not soldiers!