The Massachusetts election and the challenges ahead 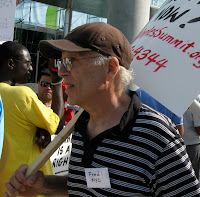 The victory of right-wing candidate Scott Brown in the Massachusetts senatorial election throws into bold relief the crisis for the workers and the oppressed in this country. It is one of leadership, politics and organization.

Having to choose between the needs of their base — the masses of workers, the poor and oppressed communities, and the progressive middle class — and their corporate masters, the top Democratic Party leadership showed once again that it is a captive of corporations and their lobbyists. The administration is surrounded by bankers, finance officials, corporate representatives, generals and admirals — just as every previous administration has been.

The understandable enthusiasm and high hopes that accompanied the historic election of the first African-American president, and the pushing back of racism that this represented, are waning as Barack Obama follows the well-trodden path of all those who step into the role of chief executive for U.S. imperialism.

The disillusionment and anger that were bound to set in were first expressed in the defeat of liberal multimillionaire and former banker Gov. John Corzine of New Jersey. The defeat of Massachusetts Attorney General Martha Coakley, the Democratic candidate for senator in that state, is another expression of that same disillusionment.

The problem at the moment is that the right wing is feeding on that disillusionment, and will try to gain ground within the working class and the middle class to sow racism, militaristic ideology and division, in the midst of a deepening economic crisis.

The forces behind Brown

This is what let Brown, a little-known, right-wing Republican and Massachusetts state senator, defeat the state’s attorney general in the Jan. 20 Senate race for a seat held by Ted Kennedy for close to half a century.

The Brown victory has thrown the Democratic Party and the Obama administration into a crisis. It tipped the voting balance in the Senate, depriving the Democrats of a filibuster-proof majority and thus threatening the health care bill and possibly the rest of the Obama administration’s legislative agenda. The Brown victory further signified that Democratic candidates may be in jeopardy in the 2010 congressional elections.

Brown is a Republican who campaigned with a blend of right-wing, reactionary positions plus demagogic appeals to the working class. His campaign was supported by the so-called Tea Party movement — a network of ultra-rightists and fascist elements that surfaced during the town hall meetings and poured vile racism and fraudulent anti-communist attacks on President Obama.

The Tea Party groups are coordinated under the umbrella of Freedom Works, a right-wing foundation headed by Dick Armey. This former U.S. representative from Texas funneled funds from the health care industry and the oil, coal and utility companies into the creation of phony “grassroots” movements against the health care bill and environmental programs. Right-wing networks around the country directed millions of dollars into the Brown campaign.

Brown denounced the bloated health care bill, backroom deals by the Obama administration and government spending. He played on the fear of increased taxes and called for creating jobs. He drove around in a pickup truck to create the image of a “man of the people.”

At the same time he came out for waterboarding and denounced legal representation for prisoners, such as those in Guantánamo. He was a champion of the so-called “war against terror.” He opposed legislation legalizing undocumented workers. He condemned cap-and-trade legislation to reduce carbon emissions — not because it is totally ineffective, but because it is “big government intervention.”

To add to the confusion and deception, Brown praised Kennedy and did not play the race card against Obama. On the other hand, he was supported by the most virulent racist and fascist elements in capitalist society and undoubtedly strengthened them politically.

Martha Coakley, on the other hand, ran a lackluster and belated campaign, basically defending the program of the Obama administration on health care, job creation, etc.

There have been endless post-election analyses of the upset. Some attribute it to the poor campaign run by Coakley. They bemoan that the outcome would have been different if only she had run a more effective campaign and had not made blunders, like not recognizing the name of a famous Boston Red Sox pitcher; if only she had not been so aloof, had not gone on vacation, etc., etc.

But this is taking a completely narrow view of the defeat. What are the circumstances that allowed a gaffe or a lackluster campaign to become decisive in an electoral race for a “liberal” seat held by the multimillionaire Kennedy dynasty for decades? Obama won Massachusetts by 67 percent. Brown beat Coakley by 52 percent to 47 percent.

Bob Herbert, the only African-American op-ed columnist for the New York Times, wrote an angry piece on Jan. 23 after the Brown victory, entitled “They Still Don’t Get It.” Wrote Herbert: “There is an economic emergency in the country with millions upon millions of Americans riddled with fear and anxiety as they struggle with long-term joblessness, home foreclosures, personal bankruptcies and dwindling opportunities for themselves and their children.”

Regarding the health care bill, which Coakley had to defend and Brown ran against, Herbert wrote: “No one in his or her right mind could have believed that a workable, efficient, cost-effective system could come out of the monstrously ugly plan that finally emerged from the Senate after long months of shady alliances, disgraceful backroom deals, outlandish payoffs and abject capitulation to the insurance companies and giant pharmaceutical outfits.”

Add to this that the banks have humiliated the Obama administration by first taking bailouts from the government and then giving out billions of dollars in bonuses to their executives. They are now pulling in record profits, refusing to lend money or readjust mortgages, and working to sabotage all restraint on their financial manipulations.

Meanwhile, unemployment together with underemployment is at 27 million to 30 million. Three million homes went into foreclosure last year, and millions more are expected. Hunger, poverty, wage cuts, pressures on the job, loss of health care and every other hardship are growing.

The big question on the minds of the workers is when this will stop and who will put a stop to it.

The greatest potential resource that the workers in this capitalist society have is the unions. But at the moment, the rank and file is paralyzed by the complete absence of any independence or struggle at the leadership level.

In the Massachusetts election 29 percent of Brown voters had voted for Obama in 2008. An AFL-CIO poll showed that union members voted 49 percent to 46 percent for Brown. These are the numbers that should be zeroed in on.

Workers and others who voted for an African-American president in 2008 have now swung to a right-wing candidate because of demagogy and because there was no place else to go.

A challenge to fight back

That is the challenge to all the advanced elements in the U.S. All those who are against capitalism, racism, imperialism, who are partisans of the workers and the oppressed in the unions, the communities, the political movements on the campuses, youth and students, must find an organizational form to come together on a national and regional level to launch a massive movement to fight back — to fight for jobs and to formulate a minimum program that can express the interests of the workers and the oppressed independently of the capitalist parties.

The liberals, social democrats and labor leadership are all fixated on the electoral arena as the primary form of political struggle. They are directly or indirectly supporters of or dependent upon the Democratic Party.

Electoral struggle is a legitimate form of struggle but cannot be substituted for mass mobilization and class combat. The way to influence legislation in this country historically has been through strikes, sit-ins, takeovers, rebellions and mass resistance of all types.

The crisis in the Democratic Party has become a crisis for the labor unions and social democrats in general. They have led the masses along behind the Democratic leadership. This is the party that just sent 30,000 more troops to Afghanistan, rains down missiles from Predator drones in Pakistan, still occupies Iraq, sent 12,000 troops to occupy Haiti, supports Israel in its suppression of the Palestinians, builds bases in Colombia, sponsored a coup in Honduras, and so on.

The crisis of the Democratic Party should not be our crisis. It should be turned into an opportunity for the broad movement of the workers, especially the labor unions, to declare their independence, to expose the capitalist interests behind the economic crisis, to fight for class unity of the workers — organized and unorganized, documented and undocumented, employed and unemployed — to open up a struggle in the streets and workplaces, and to put forward its own political program.

We should not allow the right wing to co-opt disillusionment in the midst of an economic crisis. The working class in this country is a sleeping giant. It is time for every revolutionary to think long and hard about how to go about helping this giant awake and shake the ground under the decadent ruling class, whose profit system is bringing hardship without end.

Articles copyright 1995-2010 Workers World. Verbatim copying and distribution of this entire article is permitted in any medium without royalty provided this notice is preserved.
at 7:04 AM