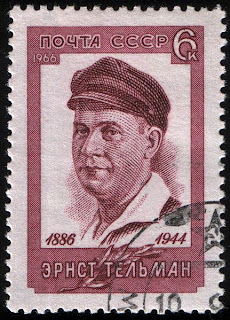 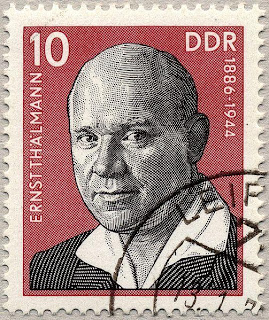 Ernst Thälmann he was out in front
His fist was raised to strike them
Brigades were growing thick and fast
To take the battle forward
The Flag was red and the fight was on
For our sturdy Comrade Thälmann
Raise your fist!

Sound the alarm! The phony court
Has sentenced him to perish
But when the people of the world
Rise up to liberation
We'll snatch the axe that falls on him
For our sturdy comrade Thälmann
Raise your fist!

Dimitrov was in just this spot
The traitors thought they had him
But news was spread at lightning speed
And world opinion freed him
The world awakes, indignation flames
For our sturdy comrade Thälmann
Raise your fist!


-Song Of The Communist International


Ernst Thalmann was the leader of the German Communist Party (KPD).

He also led a trade union federation of revolutionary unions. He was key in building solidarity for the British General Strike of 1926 among Germans.

He formed an organization called the "Red Front Fighters League" also called the "Red Fighters Brigade" (RFB) that fought the capitalists, social-traitors, and fascists in the streets. According to British Communist Wal Hannington, in his memoir "Unemployed Struggles", the RFB often burst open shops to feed starving workers. They then fought off the police with guns, allowing hungry workers to take all the food they desired.

Thalmann was associated with street fighting and heroism. During the 1929 "Bloody May" Social-Democrats in Berlin banned the May 1st Parades. Communists, led by Thalmann, marched in spite of the ban and were attacked by police and bands of fascists.

The police chief and the majority of the police who attacked and shot at the Communists during the "bloody may" events were members of the Social-Democratic Party who claimed to be Marxists.

When some of the 13,000 police attempting to enforce the ban on marches opened fire, the RFB shot back. Shortly after the "Bloody May" events, the Weimar Republic banned the ownership of fire-arms, as well as the RFB. Thalmann often spoke of the German Social-Democrats as "preaching socialism, but practicing fascism."

The KPD was outlawed when Hitler came to power, burning the parliament building (Reichstag) and blaming the KPD. Thalmann was eventually captured by Hitler in 1934 and placed in solitary confinement, until finally being executed in 1944. He was kept alive in the hopes he could be useful in bargains with the USSR. He was tortured frequently until his eventual execution.

In Spain, the "Thalmann Battalions" fought in his name against the Franco fascists. He only heard rumors of this from the guards. An international campaign "Free Ernst Thalmann" was launched, and he became a household name in most countries of the world.

When word of his death was announced, many workers throughout the Nazi run state walked off the job, refusing to work in his memory. Shortly after Thalmann's execution, the Soviet Union liberated Berlin from the fascists. A large section of Germany became the "German Democratic Republic," a Socialist country.


He was seen as the heroic idol of German Marxist-Leninists and Anti-Fascists. In the German Democratic Republic, Communist youth were known as the "Thalmann Pioneers" and they swore to live selflessly like him in the service of world revolution.
at 4:23 AM