"U.S. Out Of The Philippines!" Mic Check in NY Consulate

The action was part of a larger call from BAYAN USA for similar actions across the US and an international call from ILPS, a global anti-imperialist formation with members in over 40 countries. On the same day, nationwide protests in the Philippines against the joint war games were spearheaded by BAYAN Philippines.

Protesters practiced the "people's mic" to condemn the Aquino regime's welcoming of greater US military intervention over territorial disputes in the South China Sea between the Philippines, China, and other neighboring countries. The stated the Balikatan exercises as supported by unequal military agreements such as the VFA play to the intention of the US government to provoke military aggression against China.

"We denounce all foreign intervention our country, whether China or the US. It puts our country in unnecessary danger of being caught in the crossfire between China and the US," stated the protesters in the lobby led by Yves Nibungco of Filipino youth group Anakbayan New York/New Jersey. "These military exercises are a provocation for war," the protesters also declared.

Consulate officials were unsuccessful in their attempts to silence the protesters and force them to exit the building.

"As a US citizen, I don't want my tax dollars to murder Filipino people. US out of the Philippines!" stated Caleb Maupin of the International Action Center national office in New York City, who also participated in the surprise action inside the Consulate.

The action was preceded a day before by a community teach-in on the history of US military presence in the Philippines, it effects on the Filipino people, and current implications of the 28th Balikatan exercises in the Philippines in line with the Obama administration's declaration of a so-called "rebalance to the Asia-Pacific region" in its new US defense strategy.

But a infographic recently released by research think tank IBON Foundation illustrates the US military pivot to the region as early as 2001, when the Bush administration declared the Philippines as the so-called "Second Front to the War on Terror". The infographic also challenges claims by both the US and Philippine governments that continuing US military presence in the Philippines under the US-RP Visiting Forces Agreement is temporary and respectful of Philippine national sovereignty and territorial integrity. 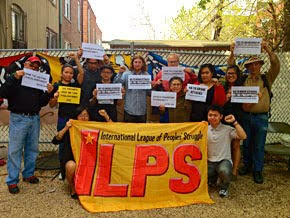