The spirit of Kim Il Sung lives on 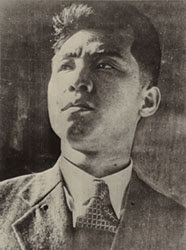 The Democratic People’s Republic of Korea is preparing to celebrate the 100th anniversary of the birth of Kim Il Sung, an amazing revolutionary who for more than 60 years led the Korean people’s struggle against imperialist domination.

His life began in April 1912, shortly after Japan had formally annexed Korea as its colony. His political development included years of anti-colonial struggle and the building of an anti-imperialist armed guerrilla force that finally achieved liberation of the north in 1945.

Kim Il Sung had to reorient the struggle after the defeat of Japan, when the United States sent troops to occupy the southern half of Korea and tried to roll back the socialist revolution in the north. The Korean people knew from direct and bitter experience what Japanese colonial rule had meant. But they were to discover that U.S. imperialism was just as brutal and just as intent on controlling and exploiting Korea, albeit under the name of “democracy.”

We cannot do justice in one small article to all that Kim Il Sung accomplished for the Korean struggle and the world movement for socialism. In this piece, we will focus on why Kim became a communist, as explained in his autobiographical series of books entitled “Reminiscences with the Century.” (Foreign Languages Publishing House, Pyongyang)

Kim came from a family of poor farmers who sacrificed much to give their children an education. His family was proud of having fought foreign aggressors: “When the U.S. imperialist aggressors’ ship General Sherman sailed up the River Taedong and anchored at Turu Islet, my great-grandfather, together with some other villagers, collected ropes from all the houses and stretched them across the river ... to block the way of the pirate ship.” The ship opened fire on the people of Pyongyang, but the villagers set it ablaze and it sank with all hands aboard. This struggle in 1866 resonated in the Kim family for generations.

Kim Il Sung described his father, who died at the early age of 31, as “a pioneer of our country’s national liberation movement.” His father was an early organizer for the Korean National Association, which was building resistance to the “living hell” created by Japanese imperialism. One of Kim’s first political memories was, at the age of six, visiting his father in a Japanese-run prison. The next year, during an uprising for independence, he saw for the first time the killing of a Korean by troops of the colonial regime.

In this period, many Korean patriots fled to China and Siberia, where there were large Korean communities. After the 1917 Russian Revolution, “when the combined forces of imperialism and the internal enemy who followed their dictates pounced upon the Soviet Union ... thousands of Korean young people gave their blood and lives with arms in hand either in the guerrilla ranks or in the Red Army in order to defend the socialist system,” Kim wrote.

Inspired by the proletarian revolution

This revolution of the workers and peasants in Russia inspired the anti-imperialist movement in neighboring Korea. Kim remembered his father explaining his idea of the proletarian revolution “as the building of a new society which would provide rice to those who had no food and ... clothes to those who had no clothing ... [and thus] he awakened the workers, peasants and other working masses to a progressive idea and united them into one revolutionary force.”

The Korean Communist Party had been founded in 1925 but “ended its existence as an organized force in 1928 owing to the cruel suppression on the part of the Japanese imperialists and the factional strife in its highest circles,” Kim wrote.

While still in his teens, Kim Il Sung became immersed in the political debates roiling the Korean exile community in Manchuria, a province of China. The Korean nationalist movement and the communist movement often were in struggle with each other, and Kim looked for ways to bring the best of them together.

The Korean revolutionaries in China also had to respect the fact that they were in another country and had important relations with the Chinese Communist Party, which itself suffered big setbacks in 1927.

Different groups of communists vied for recognition from the Comintern, based in Moscow, which dissolved the Korean Communist Party in 1928. It was in this period that Kim began developing the view that later became known as “Juche,” or self-reliance. Of his group of young revolutionaries, he wrote, “We came to the conclusion that it would be impossible to found a revolutionary party by rebuilding the party that had been dissolved or by relying on the existing generation that was infected with the vicious habit of factional strife.”

The leadership of the DPRK today is imbued with this spirit of resistance to foreign domination and reliance on the masses of people to build a socialist society. It is this spirit that has enabled the Korean Revolution to endure despite a century of Japanese and later U.S. imperialist aggression.
at 3:39 AM