After Firestorm of Protests, Florida Forced To Charge Trayvon's Killer With Murder 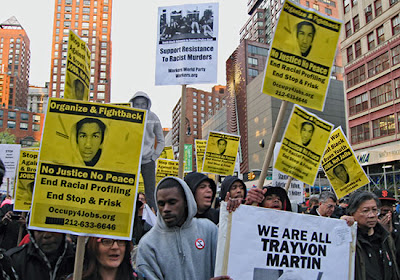 George Zimmerman, the killer of the 17-year-old African American Trayvon Martin, was formally charged on April 11 with second-degree murder. It took the state of Florida 45 days to make an arrest of the wanna-be-cop Zimmerman, who fatally shot the unarmed teenager on Feb. 26 because he looked “suspicious” while wearing a hoodie.

The charge was announced by Angela Corey, a special prosecutor who was assigned to the case on March 14 in order to decide whether or not to bring charges against Zimmerman. A conviction can carry anywhere from a 25-year sentence to life in prison without the possibility of parole.

The Statewide Prosecutor's office and the Sanford Police Department had initially refused to arrest and charge Zimmerman with Martin's murder. They gave as an excuse Florida’s “Stand Your Ground” law, which protects those who claim self-defense. Sanford, especially its police department, has a sordid history of blatant racism against the Black community.

While Corey at her press conference was singing the praises of her prosecutorial team, the governor and the police authorities, she didn't say what was most glaring: that there would have been no arrest or charges against Zimmerman had it not been for the massive explosion of all forms of protests from below — rallies, marches, sit-ins, teach-ins, walkouts and more, all demanding justice for Trayvon Martin.

Furthermore, all these forms of grassroots protests in big and small cities were inevitably leading toward a massive rebellion, starting in Florida and spreading throughout the country — if Zimmerman had not been charged with murder. The real possibility of such a rebellion led by Black and other oppressed youth weighed heavily on the racist, capitalist ruling class, who already have their hands full attempting to manage an unmanageable economic crisis.

Larry Hales, an organizer of Occupy 4 Jobs and the People's Power Tour, stated in an April 11 press release, "What made this case so egregious is that Zimmerman was never initially arrested for the heinous crime against this teenager. In many cases, racist police and vigilantes are at least put on trial, even though 90 percent of the time they are given a slap on the wrist, resulting in very little jail time, or they are not convicted and are set free. The arrest of Zimmerman is one step in a long process of bringing about justice for Trayvon Martin and his family."

Hales went on to say, "This case is more than about Trayvon Martin. He is the face of all Black and Brown young people who are racially profiled by police and vigilantes. This case is the tip of the iceberg of the war against Black and Brown youth, a war that includes growing incarceration, attacks on education, depression-level unemployment and more. We must continue to build a struggle for social justice so that victims like Trayvon Martin will not have died in vain."

In the days and months to come, the movement must be on alert in every step of the process to bring Zimmerman to justice by mobilizing in every neighborhood, every city and every state.
at 4:31 AM