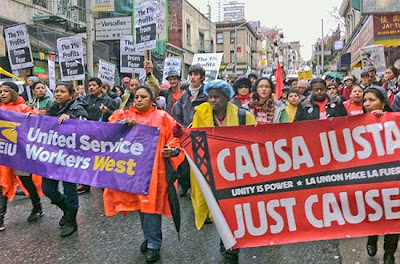 In response, the Occupy movement around the country demonstrated at federal courthouses. Occupy San Francisco decided to target Wall Street West, the complex housing the local head offices of the major banks and financial institutions that rule the country. Demonstrators held a series of actions at different financial institutions, including a protest at the 9th Circuit Court of Appeals.

At least 250 people took the street as Occupy activists chained themselves to all four entrances of a large Wells Fargo bank branch. People chanted, “Banks got bailed out, we got sold out!” and — if you replace the X with “jobs,” “schools,” “health care,” etc. — “We need X, make the banks pay!”

A group marched from Wells Fargo to the Immigration and Customs Enforcement office nearby. They denounced the Obama administration’s deportation of immigrant workers and their families as well as Wells Fargo’s investment in constructing private prisons and holding pens.

Meanwhile, another group put an office of Bank of America under siege, holding up a big banner and chanting, “Bank of America, bad for America!” Of course, the bank is based in the U.S., but it is undoubtedly bad for the entire hemisphere. Occupy activists also chained themselves to the doors.

The BofA deserved more than just a siege, so the 99% decided to hold a peoples’ trial with the big bank facing charges. About 400 people witnessed as foreclosed homeowners detailed BofA’s and Fannie Mae’s manipulations and deceits when first offering and then foreclosing on mortgages. The main chant after each testimony was “Give the deed back!” which was repeated continually.

Bank of America and Wells Fargo have foreclosed on more people in San Francisco than any other mortgage-holders. The mostly African-American and Latino/a communities of Mission, Bayview and Excelsior have been hit especially hard.

At midday more than 1,000 people took to the streets and marched through the Financial District, which is in central San Francisco on the edge of the Asian community. The main chants included, “We are the people, no one is illegal/¡Todos somos humanos!” and “¡La Migra, la policia, la misma porqueria!” (La Migra, the police, the same filth!) Among the marchers were about 200 from Occupy Oakland, which brought its sound bus, a transformed Alameda County Transit bus.

Citibank and Bechtel headquarters were also targeted throughout the day.

Marchers joined the UNITE HERE picket at the Hyatt Regency, where workers have been fighting for a fair contract, swelling the ranks of the picketers.

After the workday ended, the crowd grew even larger. Despite a heavy rainstorm, this was the largest Occupy action of the new year. More than 100 Occupiers gained entrance to the Cathedral Hill Hotel at 1001 Van Ness Ave., taking over the hotel for hours. A site of labor disputes, the hotel sits vacant while 10,000 homeless people are living on the streets of San Francisco.

This action at Wall Street West shows that the Occupy movement is still going strong, despite the centralized decision of the capitalist state to use force to drive activists out of the parks and squares they were using as organizing centers. More than that, the movement is still directing its fire against the most powerful capitalist institutions: the banks and the politicians who bail them out.

The Occupy movement’s activity in solidarity with immigrant workers is growing, as is its direct actions to stop foreclosures on peoples’ homes, popular churches and movement offices by the hated mortgage companies and its solidarity with organized labor.
at 3:12 AM