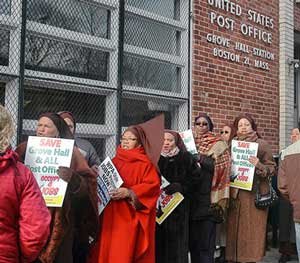 Occupy4Boston sent an express mail message to Postmaster General Patrick Donahoe for Martin Luther King Day: “Hands off our post office and our community!” Hundreds of community and labor activists picketed and rallied in the very heart of Boston’s Black community on Jan. 14 at the Grove Hall Post Office in Roxbury. It is slated for shutdown by May.

Subfreezing temperatures did not deter people from coming out to defend their jobs and their post office, so sorely needed for services in the community. Charles Clemons of the radio station Touch 106.1, “the heart of the Black community,” chaired the rally. The station broadcast the event live.

Minister Don Muhammad of Nation of Islam Mosque 11 opened the rally by declaring, “If Dr. King were alive, he would be here with us today, to say again, ‘Let justice roll down like waters and righteousness like an ever-flowing stream.’”

Boston City Councillors Charles Yancy, Felix Arroyo, Tito Jackson, Ayanna Pressley and Frank Baker came to give their support. Yancy related his meeting with Dr. King in 1965 and pledged, “We cannot and will not stay silent while they are laying off people at the post office.”

Miya X, representing the Women’s Fightback Network, stressed, “The working class, the poor and our youth are fighting for survival. We need to occupy the MBTA! [Massachusetts Bay Transportation Authority]. Our youth are suffering from a 50 percent unemployment rate and schools are being shut down in the Black community.”
2012 photos by Liz Green

The rally marked the emergence of a new community/labor coalition in Boston — Occupy4Jobs — which is organizing with broad and deep support. The post office struggle has enraged many communities in greater Boston and around the country, as that agency moves to privatize a public sector workforce that has provided good union jobs to hundreds of thousands of workers, many of them in oppressed communities. The Occupy4Jobs Network is organizing community/labor coalitions in Boston, Baltimore, Philadelphia, New York City and San Francisco at breakneck speed as worker anger mounts nationally.

Unions brought out their members to the rally in significant numbers. Paul Kilduff, president of the 2200 member-strong Metro Local 100 of the American Postal Workers Union, while defending dozens of post offices in his jurisdiction, was nevertheless mindful of the impact on Roxbury residents. Under the proposed closings, thousands of people will have to take two buses to the nearest post office in Dudley Square. Kilduff called out: “Services that are desperately needed are being cut back. We will fight back. Whose post office? Our post office!”

Myles Calvey, business agent of International Electrical Workers union Local 2222, rallied the demonstrators with the support of his union, which is currently in a national contract struggle with Verizon Communications Inc. Steve Tolman, president of the Massachusetts AFL-CIO, pledged the support of his 400,000 statewide members.