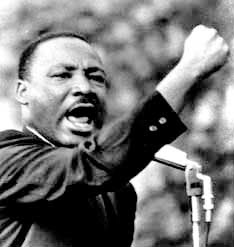 The Rev. Dr. Martin Luther King Jr. would have been 83 years old on Jan. 15. In honor of this iconic civil rights, anti-war and social justice activist, the federal government and other public agencies close every year on the Monday following his birthday. King was martyred in Memphis, Tenn., on April 4, 1968.

This year the King Day holiday will take on profound significance in light of the political and social developments that have occurred over the last year. Millions have taken to the streets around the world in the fight against poverty, increased attacks on working people and the oppressed, and imperialist wars.

Since January of last year, revolutionary movements have emerged from Tunisia and Egypt to Bahrain and Yemen. Rebellions and general strikes led to the resignation of long-time Western-backed puppet President Zine El Abidine Ben Ali in Tunisia and the forced removal of President Hosni Mubarak in Egypt.

In Morocco the monarchy was shaken by mass demonstrations that were largely unprecedented in recent times. Other states throughout the Middle East, Africa and Europe saw popular movements erupt in opposition to rising food prices, the imposition of austerity and the intervention of U.S. imperialism along with its NATO allies.

Workers in European capitalist countries, especially Greece, Spain and Portugal, suffered tremendously from the ongoing world economic crisis. In Britain Black and working-class youth rose up in rebellion in response to the blatant police killing of a Caribbean-British man, who was followed and shot to death in cold blood in London.

Inside the U. S., a people’s uprising in Wisconsin was a direct response to intensifying attacks on public sector workers and their right to collective bargaining. Workers and youth occupied the state capitol in Madison for weeks and drew the attention of people throughout the world.

Occupation participants in Wisconsin paid direct tribute to their class brothers and sisters in Egypt. The progressive forces in Egypt, during the same time period, expressed their solidarity with the people in Wisconsin.

This movement of workers and youth, aimed at defending the right to organize as well as the right to quality education and a decent wage, spread to other states around the Midwest and nationally. In Ohio, legislative actions that were just as draconian as those passed in Wisconsin prompted mass action by trade unions and their supporters.

In Lansing, Mich., the conservative-dominated legislature wasted no time, after securing a majority, to enact bills that drastically cut public spending. These cuts resulted in salary reductions, massive layoffs of public sector employees and the obliteration of city services.

The passage of Public Act 4 in Michigan superseded the former Public Act 72, which allowed for the imposition of emergency management of school systems and municipalities. Public Act 4, now popularly known as the “dictator law,” provides for the nullification of the authority of elected officials, the abrogation of labor and vending contracts, and the forced payment of debt service to the banks, irrespective of the desires of the electorates or the unions.

Public Act 4 has been implemented in several majority African-American cities such as Flint and Benton Harbor. In Detroit — the largest African-American-dominated city in the U.S. — Gov. Rick Snyder recently appointed a financial review panel. The appointment is an effort to justify forcing the city to accept a consent agreement that could ultimately lead to installation of an emergency manager.

The year that Dr. King was killed represented a watershed of mass struggle and urban rebellion. The previous year, 1967, saw more than 160 instances of civil unrest throughout the U.S. as well as the emergence of a mass youth movement in opposition to the war in Vietnam.

Although Dr. King was a proponent of nonviolent direct action, he did not condemn the rebellions that swept the country between 1964 and 1968. The civil rights leader viewed the unrest within the urban areas as a result of the failure of the U.S. system to provide adequate living conditions, decent jobs and incomes to the majority of African Americans.

In a “Face to Face” television interview conducted on July 28, 1967, just one day after President Lyndon Johnson announced the appointment of a National Advisory Commission on Civil Disorder, Dr. King said, “I am not calling for a guaranteed annual wage as a substitute for a guaranteed job. I think that ought to be the first thing, that we guarantee every person capable of working a job.” (“Testament of Hope, The Essential Writings and Speeches of Martin Luther King, Jr.,” 2001)

Dr. King pointed out that “this can be done in many, many ways. There are many things that we need to be done that could be done that’s not being done now. And this could provide jobs.”

In 1968, Dr. King and the Southern Christian Leadership Conference set out to wage a real “war on poverty” by taking thousands of poor people to Washington, D.C., to demand jobs and a guaranteed annual income. King had founded the SCLC in 1957 in the aftermath of the Montgomery Bus Boycott. In March 1968, he was invited to Memphis to support a sanitation workers strike that was representative of both the class struggle and the national question.

The year 1968 was an election year just like 2012. The failure of the Democratic Party between 1961 and 1968 to effectively resolve the problems of national oppression, discrimination, economic exploitation, poverty and war played a large part in its losing the elections in 1968.

Despite the fact that the Democratic and Republican parties have different constituencies, both organizations are controlled by the ruling class of bankers and industrialists. Today, even though the Democratic Party has commanded a majority in both houses of Congress between 2006 and 2010 and has controlled the White House since 2009, rates of poverty and exploitation are continuing to rise.

The 2010 election results were a reflection of the lack of motivation on the part of working-class people and the nationally oppressed to once again support Democratic candidates without any real improvement in the concrete conditions under which they live.

The year 2011 saw an acceleration of attacks against workers and the oppressed. The only real defense against these assaults has emanated from the unions, the youth and the oppressed communities themselves.

This is why there needs to be a concerted effort outside of the established ruling class parties to address the crises now facing the majority of people inside the U.S. The response of the Department of Homeland Security to the Occupy Wall Street movement across the country — with DHS operating through local municipal administrations, many of which are led by Democrats — demonstrates that both of the capitalist-controlled parties do not want to see a real grass-roots revolutionary struggle emerge that focuses on the role of the banks and the corporations as the fundamental cause of the economic crisis.

It was the political repression carried out under a Democratic administration in 1968 that created the conditions for the assassination of Dr. Martin Luther King Jr. That same year, FBI Director J. Edgar Hoover declared the Black Panther Party as the leading threat to the national security of the U.S.

After 1967, during the height of the rebellions, the FBI’s Counter-Intelligence Program (COINTELPRO) sought to crush the Black Liberation movement and the anti-war struggle. Scores of activists were killed and imprisoned while the National Guard and conventional military forces were deployed into the cities to smash the rebellions.

Since 2010, the FBI and other DHS branches have targeted immigrants, the nationally oppressed, Muslims, anti-war and solidarity activists for deportation, raids, targeted assassinations and grand jury subpoenas. In the final days of 2011, President Obama signed into law the National Defense Authorization Act, which provides further ammunition for the ruling class to crack down on activists and organizations deemed to be threats to the status quo.

2012: Another year of momentous struggle

In all likelihood this year will also be one of protracted struggle and resistance. Signs of this are already developing, with Jan. 16 King Day actions under the banner of Occupy 4 Jobs – inspired by the Occupy Wall Street movement – in New York, Baltimore, Washington, D.C., Boston, Philadelphia and elsewhere.

Detroit is the focus of a growing mass struggle against the imposition of emergency management. On Jan. 2, more than 2,000 people rallied at Tabernacle Missionary Baptist Church to say “no” to the appointment of an emergency manager.

In a statement, the Moratorium NOW! Coalition to Stop Foreclosures, Evictions and Utility Shut-offs stressed, “The same banks that caused the economic crisis and destroyed the City of Detroit’s tax base, with their fraudulent and racist predatory loans resulting in approximately 150,000 foreclosures in the past five years, now get first lien on city tax dollars for debt service payments.”

Detroit’s 9th Annual MLK Day Rally & March will be held under the theme of “Escalating the Struggle for Jobs, Peace and Justice.” Featured speakers will include contributors to the groundbreaking first-person account “Hands on the Freedom Plow,” which examined the role of women in the Student Nonviolent Coordinating Com­mittee, the vanguard organization within the Civil Rights movement of the 1960s.

The emphasis at Detroit’s MLK Day rally will drive home the need for a cadre-developing organization, a working-class orientation, the important role of women and the oppressed, and the need to build a movement outside the ruling-class-dominated political parties.
at 6:16 AM