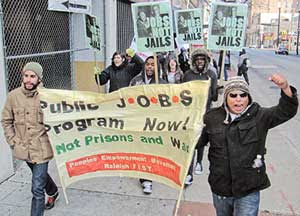 Protesters scored a number of victories on the 40-mile March for Jobs & Justice to Washington, D.C. They began the Civil Rights march on Jan. 14 in Baltimore and were greeted by Occupy Washington, D.C., when they arrived on Jan. 16. Representatives of the group will remain for an Occupy Congress event on the National Mall, where protesters have vowed to set up a million tents.

The marchers’ trek began at Union Baptist Church of Baltimore, where more than 100 people staged a march to Reads drugstore, which was the site of historic Civil Rights sit-ins in 1955. The city administration and big developers have slated to tear the site down, but community activists, led by those who actually participated in the sit-ins, want the site preserved to honor the Civil Rights Movement.

When the group arrived in the downtown shopping area just blocks from Reads, police attempted to clear the street. When they grabbed Occupy 4 Jobs organizer Sharon Black, tearing the hood from her coat and pushing her to the sidewalk, they yelled, “We’re going to make an example out of you! You’ll be the first one on the sidewalk.”

Marchers were defiant, refusing to move to the sidewalk, and continued in the street to the drugstore. Hundreds of shoppers cheered as they watched the group continue.

When the march arrived at the former drugstore, 77-year-old Dr. Helena Hicks got out of the lead vehicle. Thirteen police cars had surrounded the marchers, filling the block of Lexington Street.

Standing in the middle of the street, Dr. Hicks took the microphone and challenged police to arrest her, exclaiming, “We have a right to protest in these streets.” She said there were fewer police at Reads when she participated in the 1955 sit-ins than today, and the police department and the city should be ashamed.

Dr. Hicks was a 20-year-old Morgan State University student when she, along with others, sat in at the drugstore to desegregate the chain that refused to serve African-American people at their lunch counter. Their protests were successful and helped usher in an era of struggle for the Civil Rights Movement in Baltimore.

The standoff between police and protesters continued for about 30 minutes. The group then continued with its plan to send off a smaller delegation to march to Washington, D.C. Fifty protesters began the walk under heavy surveillance by police, who had squad cars follow the group to Route 1.

The marchers had scheduled a meet-and-greet event with activists in Howard County at a local Burger King, about 15 miles outside Baltimore. Originally the local manager was friendly and welcoming to the group. But before the march arrived, the regional manager told local organizers that the group would not be welcomed or served, and that they could not even be in the parking lot, which was “private property.”

Protesters began calling local and national news media. The group decided not to call off their rally and to go into the store as a group. The Rev. Cortly “C.D.” Witherspoon, president of the Baltimore Southern Christian Leadership Conference, was the first to walk in, picket sign in hand. He was followed by the 50 protesters, accompanied by a newspaper reporter.

Burger King relented. The regional manager who put out the “no protesters” message greeted the marchers with a smile and served the group burgers and fries. One participant remarked, “You can tell he never works here. He doesn’t know where things are behind the counter.”

On Jan. 16, the group finally arrived at Occupy Washington, D.C., tired but elated. The walkers ranged in age from 19 to 71.

The Rev. Witherspoon summed up the sentiments of marchers: “We have won far more than just the tangible victory of bringing the needed attention to the issue of jobs and justice, stopping the police from violating our rights, and forcing Burger King to serve us. We have given hope to the jobless, hope to the youth who are looking for bigger solutions, and solidarity to our participants.”
at 10:20 PM