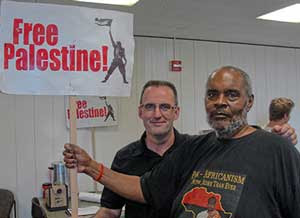 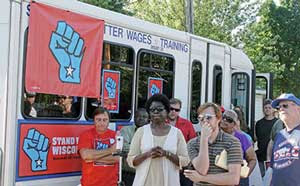 The Wisconsin AFL-CIO and other labor, community and student organizations are mobilizing for the next recall elections on Aug. 9. They are aiming to oust six union-busting, pro-austerity Republican state senators.

The right-wingers passed a draconian state budget in June, which makes the deepest cuts to schools, health care and communities in Wisconsin history. It raises taxes on seniors and working families by $70 million, while providing $300 million in corporate giveaways. African Americans, Latinos/as, women, children and the elderly, already hit hardest by the economic crisis, will be plunged into destitution if these cuts aren’t resisted and pushed back.

Thousands of workers and community members are knocking on doors, protesting and joining in actions such as the Wisconsin State AFL-CIO’s week-long “Truth Tour.” The statewide campaign began at the Teamster Hall in Green Bay on July 16 and will continue through early August.

This mobilization provides a forum for those impacted by Wall Street’s austerity measures to speak out. It is also building support for the recall campaigns and increasing solidarity among labor, community and student organizations.

“We are mighty in thought, presence and the work we are doing every day,” said Sheila Cochran, secretary-treasurer of the Milwaukee Area Labor Council, on July 26 at the tour’s labor council stop. Cochran noted, “They call us special interest. They are right. We do have the special interest of the working people of Wisconsin in mind.” (http://wisaflcio.typepad.com/)

Mahlon Mitchell, president of the Wisconsin firefighters union, told the crowd, “We have to keep taking it to the streets. Let’s keep fighting. Solidarity.”

Protests continue against reactionary Tea-Party-aligned politicians such as Gov. Scott Walker and State Sen. Alberta Darling. Jobs Now, the Service Employees union, Citizen Action and other groups demonstrate frequently at Darling’s campaign offices. Activists shout down and challenge Walker everywhere he appears. The Wisconsin State Fair will be the location of the next protest against Walker on Aug. 4.

A people’s mobilization is in the works to confront the Aug. 5-8 neo-fascist, racist Tea Party Express “tour.” The Wisconsin Bail Out the People Movement’s blog says that the Tea Party’s visit to “a region of the country that has been one of the most devastated by the economic crisis of capitalism — must not go unchallenged.”

Wisconsin BOPM says that the Tea Party “is attempting to appeal to the popular discontent in the face of the economic crisis and attacks on poor and working people ... [by] budget cuts, layoffs and union-busting attempts by Wall Street. However, they want to fuel that discontent into a reactionary program that scapegoats immigrants, targets people of color and LGBT people, blames unions, attacks safety nets like Social Security, Medicaid and Medicare and opposes women’s rights.”

The organization calls for “A powerful movement ... that points its fire at the rich and that fights for a massive public jobs program, real national health care, a moratorium on foreclosures, ending the wars, canceling student debt, building schools not prisons and using Pentagon dollars to pay for education, housing, social services and rebuilding the country’s infrastructure.”

This progressive coalition encourages everyone to join and protest at the Tea Party Express tour locations. (For more information, see http://wibopm.org)

‘We Will Not Rest’

Other Wisconsin struggles include the fight against attacks on the people’s movement. On July 3 the Milwaukee Committee To Stop FBI Repression sponsored a meeting at the University of Wisconsin-Milwaukee that featured Professor Ahmed Mbalia of Africans On The Move; Tom Burke, national spokesperson for the Committee To Stop FBI Repression; and immigrant rights activist Carlos Montes via Skype from Los Angeles. Speakers told of FBI terrorism against Black and Latino/a communities; resistance of 23 anti-war, immigrant rights and solidarity activists to FBI raids last fall; and Montes’ struggles against state repression. (www.stopfbi.net)

That day protesters also rallied at the state Capitol in Madison to demand adequate funding and respect for public education as part of the national Save Our Schools campaign. “Public schools are under attack,” said Thomas J. Mertz, Wisconsin education activist. “There is a need for national, state and local action in support of our schools. Wisconsin has been ground zero in this.” He called for building the state movement on this crucial issue.

On July 12 the Milwaukee Inner City Congregations Allied for Hope, a coalition of churches and other faith-based organizations, held a protest and press conference at the Westlawn Project construction site. Although this site is located in the predominantly African-American community on Milwaukee’s Northside, speakers emphasized that there are many construction projects there, but little effort is made to hire African-American or other people of color.

Rev. Willie Brisco of MICAH said there is a “state of emergency” in Milwaukee. He referred to the Milwaukee NAACP’s June report entitled “Milwaukee Today,” which says this city is among the worst in the country regarding segregation, poverty, unemployment and more. He told of the crises for this city’s African-American community in unemployment, infant mortality rates, education and incarceration.

Rev. Brisco stressed, “The bottom line is we will not rest on this issue. We will not stop demanding that these unemployment statistics decrease.” He called for activists and supporters to help stop these injustices. (Milwaukee Courier, July 16)

The Milwaukee Teachers Education Association just released a membership survey showing the majority rejected opening up their contract to give more concessions to Milwaukee County. MTEA President Bob Peterson told members that he’s hopeful “the energy of the protests this past spring in Madison and the enthusiastic involvement of MTEA members in the upcoming recall elections will continue to inspire us in the work ahead.” (http://www.mtea.org)