Mass Rally Planned "For The Love of Egypt" 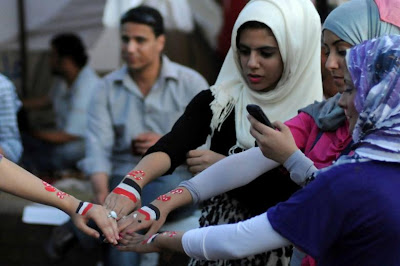 On Sunday, 30 parties and political movements announced that they will participate in the rally planned for next Friday in Cairo's Tahrir Square. The rally is called "Together for the love of Egypt."

A joint statement issued by the groups said the purpose of the rally is to call for a civil state, whereby all religious creeds are respected and all Egyptians are equal.

Hamada al-Kashef, a member of the Revolution Youth Union, said the rally is not a response to the mass rally staged by Islamists two weeks ago.

Among those who will participate are the National Association for Change, the April 6 Youth Movement, the Egyptian Communist Party, the Revolution Youth Union, Sufis, the Adl Party, the Egyptian Democratic Party and several Coptic coalitions.

Participants said they reject any attempts at dragging religion into politics or play on the Egyptians’ emotions.

The statement said the rally will be like a national carnival, opening with the largest collective iftar in the Middle East under the title "For the love of Egypt, together we break the fast and pray.” The banquet will extend from Abdel Moneim Riyad Square to Qasr al-Aini Street. Islamic and Coptic religious songs will be sung afterwards.

The statement said the objective is to call for completing the Egyptian revolution, which defended freedom, social justice and human rights.

It also called for a passing a law to criminalize discrimination, defending the rule of law, and drafting a constitution that safeguards the civil state.
at 6:51 PM