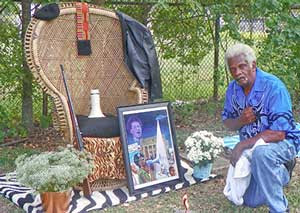 “Houston’s Black Panther leader Carl Hampton was assassinated by the Houston police 41 years ago today, and we are here at his gravesite to honor Carl and remember his contribution to the fight we are still waging in the Black community for justice and equality. We will never forget Carl,” Sensei Benton told the crowd of activists at
Ayanna Ade called on the elders for permission to begin the memorial celebration.

Both Ade and Benton spent years in the Black Panther Party in Oakland, Calif., and Houston.

Several people who had known Hampton spoke of his leadership in the work the Panthers did in the Houston community. As tributes were spoken, a saxophone played by Brother Enoch sang soulfully in the quiet, wooded cemetery. Hampton was an accomplished musician as well as a revolutionary activist and played the sax.

Hampton was shot from the roof of St. John’s Missionary Baptist Church on the hot night of July 26, 1970, by Houston police as he walked down the street in front of the Panther office. In the ensuing shootout, three others were injured; two of them were later charged with attempted murder of a police officer.

On Dec. 18, Hampton’s birthday, the Carl Hampton Memorial Committee will place a ledger stone — with Hampton’s picture, information and a large Black Panther image — on the deceased leader’s grave.
at 3:07 AM