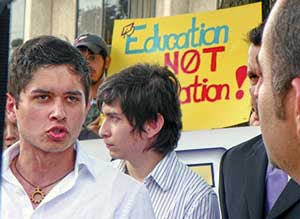 Texas DREAM students — advocates and activists for the Development, Relief and Education for Alien Minors Act — won a major victory on July 25 as Marlon Arboleda, a University of Houston student, turned himself in to Immigration and Customs Enforcement authorities and came out with a deferred action on deportation. When Arboleda and his attorney emerged less than an hour later, shouts of joy filled the air.

The sidewalk in front of the Immigration Processing Center in north Houston was filled with young DREAM students and their supporters, who cheered upon hearing the good news. Earlier in July Arboleda’s brother, Mauro Arboleda, was detained by ICE agents as he left his home to tutor a student, despite having a valid driver’s license. Mauro eventually got deferred action on his deportation and was told his brother had to turn himself in to be considered for deferred action.

Mauro and Marlon Arboleda (top photo) came to the United States in 2004 to escape violence in Colombia. After being denied an asylum petition in 2007, the brothers lived a vulnerable life knowing that, at any time, they could be deported to a country they fear.

Mauro graduated in May from the University of Houston and plans to enter graduate school. An honor student, Marlon is a junior in mechanical engineering. Upon graduation, he plans to work with renewable energies and green technologies.

“This victory today raised awareness over the importance of passing the DREAM Act to ensure that good students such as the Arboleda brothers do not have to go through the same hardship. Students from Houston and across Texas were at the ICE office to support Marlon,” said Cesar Espinosa, director of Familias Inmigrantes y Estudiantes en Lucha.

FIEL sponsored the action along with United We Dream, in association with Texas Dream Alliance, the National Hispanic Professional Organization, and dozens of local Houston activists.

Both of the Arboleda brothers thanked their supporters profusely and declared the struggle would continue until the DREAM Act is passed by Congress.
at 3:03 AM