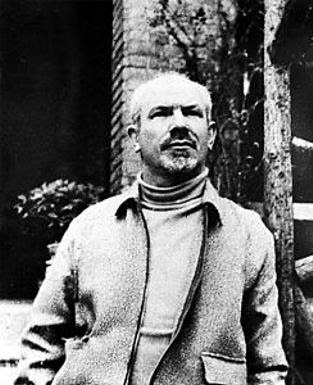 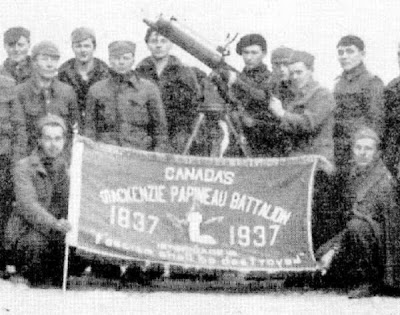 July 18, 2011, marked the 75th anniversary of the outbreak of the Spanish Civil War, fought between the people's forces or Republicans who had been elected to govern, and the fascist "Nationalist" forces, led militarily by General Francisco Franco (see TML, July 16, 2011). Franco was openly assisted militarily and financially by Nazi Germany and fascist Italy. The people's forces were aided by anti-fascist volunteers from all over the world, including Canadians of the Mackenzie-Papineau Battalion of the XVth International Brigade of the Spanish Republican Army. Battalion members came from all parts of Canada and were almost wholly working class. About one-third were of Ukrainian origin. 1,546 people volunteered to go, including Dr. Norman Bethune, a communist medical doctor from Montreal who invented the mobile blood unit on the Spanish battlefield, and died helping the wounded in 1939 near the end of the Anti-Japanese Anti-Fascist War led by the Communist Party of China. The Mac-Pap volunteers felt that they had to defy their government's unjust law in order to stand up against fascism in Spain and defend the rights of the peoples of the world.

While the Canadian people supported the anti-fascist forces in Spain in both words and deeds, the Canadian ruling circles supported the fascist forces by declaring Canada's "neutrality". In April 1937, the Mackenzie King Liberal government passed the Foreign Enlistment Act, based on the British Imperial Foreign Enlist Act [1870] which extended to all Dominions. The 1937 Act stipulates that it is an "Offence to enlist with a foreign state at war with a friendly state" and that "any person who, being a Canadian national, within or outside Canada, voluntarily accepts or agrees to accept any commission or engagement in the armed forces of any foreign state at war with any friendly foreign state or, whether a Canadian national or not, within Canada, induces any other person to accept or agree to accept any commission or engagement in any such armed forces is guilty of an offence." In practice, the declaration of "neutrality" by Canada, the United Kingdom, France, the United States, and other countries gave the Franco forces free rein to more viciously attack the Spanish people and set the stage for the Nazi invasion of Europe.

The two main internal forces for "neutrality" in Canada were the Canadian industrialists who had financial interests in Spain, such as the Barcelona Traction electrical utility (later taken over by Franco's multimillionaire backer, Juan March), and the reactionary hierarchy of the Catholic Church which was a major landowner in Spain. In passing the Foreign Enlistment Act in 1937, the King government was also kowtowing to their old masters in Britain and their new masters in the United States,[1] both of whom had also pushed through "neutrality" legislation. Both the UK and U.S. had big investments in Spain and profited directly from supporting Franco.[2] Mackenzie King was also a rabid anti-communist, a fascist sympathizer who praised Mussolini, and an admirer of Hitler. He visited Germany in June 1937 and stated in a memorandum that he was "very favorably impressed" by Hitler's assurances that Germany would not go to war in Europe, even as Nazi Germany had thousands of men and tons of war material already engaged in Spain on behalf of General Franco.

The Oxford English Dictionary defines neutrality as "the state of not supporting or helping either side in a conflict, disagreement, etc.; impartiality." In practice, however, those capitalist governments who declare neutrality in words do not act neutrally and do not enforce neutrality in deeds. Instead they do whatever is profitable. Switzerland declared "neutrality" during the Second World War, but the Swiss banks were a haven for Nazi plunder. Sweden also declared neutrality during the Second World War, but SKF, a monopoly owned by Sweden's leading finance capitalist, Marcus Wallenberg, provided the Nazis with a reliable supply of ball bearings crucial to waging aggressive war. As a result, the financial oligarchies in both Switzerland and Sweden emerged from the war with huge increases in their wealth. Similarly, during the Spanish Civil War, the declaration of "neutrality" by the King government was totally phony because in practice everything was done to try to protect the profits of the monopolies, while nothing was done to oppose Franco's forces.

Canada's Foreign Enlistment Act made the anti-fascist workers' volunteering to fight against fascism in Spain into a criminal act, to be punished immediately with jail terms and to be punished for generations after by denial of any claim of pensionable military service. The passports of the 1,300 Canadian volunteers were confiscated and the RCMP opposed their re-entry into Canada. Only 646 ever returned. Far from acclaiming these true working class heroes for resisting fascism, the Canadian government and media of the day demonized their political motivations and beliefs. The ruling circles supported the fascists, just as they do today, while criminalizing the anti-fascists, just as they do today. Julio Alvarez del Vayo, who was Spanish Minister for Foreign Affairs of the Republican government during most of the civil war, summed up "... the whole saga of non-intervention" as follows: "It was the finest example of the art of handing victims over to the aggressor States, while preserving the perfect manners of a gentleman and at the same time giving the impression that peace is the one objective and consideration."[3]

Subsequent Canadian governments have followed Mackenzie King's policy of phony neutrality in order to support the most reactionary forces. Although the "neutrality" of the Foreign Enlistment Act made it illegal for Canadians to enlist in conflicts where the Canadian government was not a participant, and still applies to this day, Canada announced on March 1, 1940, that citizens were free to enlist in the Finnish armed forces, which were collaborating with the Nazis against the Soviet Union. On May 18, 1948, the Canadian cabinet decided that the question of application of the Foreign Enlistment Act to Palestine should be deferred so as to facilitate the military recruiting of Canadian nationals to suppress the Palestinians. In the 1960s and 70s, over 100 Canadians "illegally" enlisted with U.S. forces in the aggression against Vietnam. Finally, the recent Liberal governments of Jean Chrétien and Paul Martin did not charge Zionist groups with violating this law when they set up recruitment tables for the Israeli Armed Forces at Concordia University and some other campuses. TML Daily pointed out at the time, "This shows that the Canadian ruling circles persist in their highly selective and self-serving definitions of what political aim Canadians shall be permitted to volunteer to serve..."[4]

Today, the Harper government continues the blatant use of high sounding, self-serving definitions such as "neutrality" to support interventions on behalf of the fascist and imperialist forces and to oppose anyone who stands against them. The Harper government has attacked those Canadians who support the Palestinians as being "provocative", while allowing Israel to recruit Canadians into the Israeli Army to commit crimes against the Palestinian people. Resistance movements that fight for the interests of the people have been falsely labeled as "terrorist" and support for them has been criminalized, while a blind eye is turned to countries that carry out state terrorism against their own and other peoples. The Canadian military is sent to sovereign countries such as Haiti, Afghanistan and Libya to oppress, kill and bomb people under ever new disguises such as "responsibility to protect," "fighting terrorism", and "humanitarian intervention," while those who dissent against such ventures are spied on and repressed. Just as his predecessor Mackenzie King did during the Spanish Civil War by claiming "neutrality," Harper shamelessly uses the Canadian people's strong sentiment for peace and non-intervention to try to establish Canada as a supporter of the world's most reactionary forces.

Canadians defied this in 1936 by valiantly participating in the Republican Army's 15th Brigade and they continue to stand against all crimes against peace today.
Notes

1. Mackenzie King worked for the Rockefeller Foundation from 1914-18 to help whitewash John D. Rockefeller's role in the 1913 massacre of the striking Ludlow miners and to help Rockefeller draft a set of policies and principles to undermine the militancy of labour and to facilitate its collaboration with capital. David Rockefeller stated at one time that Mackenzie King was his father's "best friend."

2. Examples include British-owned Rio Tinto's mining interests, U.S.-owned ITT's Telefonika utility, sales of gasoline to Franco by the Texas Oil Company, and the sales of 12,000 military trucks to Franco by Ford, Studebaker, and General Motors. José Maria Doussinague, who was undersecretary at the Spanish Foreign Ministry, said, "without American petroleum and American trucks, and American credit, we could never have won the Civil War."