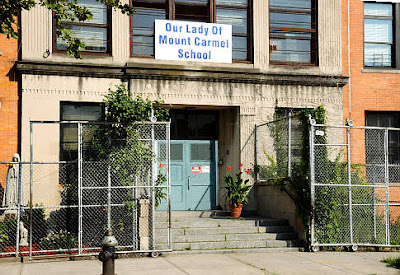 A firebrand educator with ties to a white supremacist group is running a Bronx Catholic school where most of the students are black and Latino, the Daily News has learned.

Frank Borzellieri, 48, was quietly promoted to principal of Our Lady of Mount Carmel School two years ago - despite a history of controversial writings and campaigns, including a push to ban a biography on the Rev. Martin Luther King Jr.

In 2004, Borzellieri wrote the book "Don't Take It Personally: Race, Immigration, Crime and Other Heresies," in which he declares "diversity is a weakness" and says the rising black and Hispanic populations in America will lead to the "New Dark Age."

He has also written frequently for the white supremacist publication American Renaissance, with which he is still "intimately involved," the non-profit Southern Poverty Law Center says.

Mount Carmel pastor, the Rev. Eric Rapaglia, said he knew of Borzellieri's views, but didn't "see any cause for concern" when he hired him to run the 200-student elementary school.

"I knew of him from my last parish," he said. "Do I agree with all of it? No. But I think much of it is valuable and logical and reasonable.

"A lot of his ideas would actually benefit minorities," he added.

Borzellieri, who unsuccessfully ran for state Assembly in 1994 and City Council in 1997, previously made headlines as a school board member in District 24 in Queens, where he lives.


# Ban literature he labeled "anti-American" from school libraries. His targets included books on different races and culture, and a biography of King.


# Remove an openly gay teacher and gay-rights activist from the classroom at Public School 199 in Sunnyside, and ban school employees from making any references to homosexuality.


# Introduce a resolution calling for students to be taught that U.S. culture is superior.

Borzellieri's views rankled teachers at St. Barnabas School in Woodlawn, Bronx, where he taught English from 2006 to 2009.

"You can't have someone with those beliefs or who writes that kind of stuff working at a Catholic school," said Annemarie Zagaglia, principal of St. Barnabas School during Borzellieri's time there.

When Rapaglia was the pastor of St. Barnabas, Zagaglia warned him that teachers had legitimate concerns about Borzellieri. She said Rapaglia "dismissed the whole thing, and that was the end of that."

Rapaglia became pastor of Mount Carmel - in Fordham, Bronx - in 2009 and hired Borzellieri as principal that year.

A former teacher at St. Barnabas said she alerted the Archdiocese of New York in 2007 that students had complained Borzellieri was using them as "research" for his books, but the teacher never got a response.

Archdiocese spokesman Joe Zwilling said there is no record of a complaint against Borzellieri, but said the matter is under review.

Zwilling added that sweeping changes in hiring parish principals went into effect in 2009 - right after Borzellieri got the gig.

"Previously, pastors had great leeway and discretion in the hiring of principals," Zwilling said. "That practice usually worked well, but we saw room for improvement."

Parents of students at Mount Carmel voiced concern after the Daily News informed them of Borzellieri's past.

"I've heard kids say they don't like him," said one mother, a Jamaican immigrant. "I was wondering where the heck he came from. He shouldn't be teaching here. He could look at kids differently because they're black. It's not fair."
at 11:55 PM