What Can Stop Austerity? Resistance! 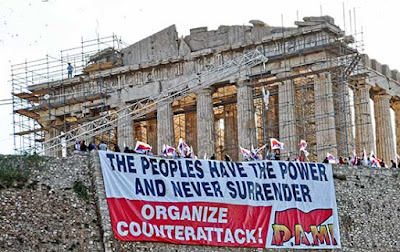 At first glance it would seem that Athens, Ohio, and Athens, Greece, are worlds apart. Not only does language separate them, but more than 5,100 miles of land and ocean stand between them. The only thing they seem to have in common is a name.

In cities, towns and states all across the U.S., workers have had their lives torn apart by draconian budget cuts, layoffs and foreclosures resulting from the loss of income and jobs, and more recently a right-wing assault to strip workers of union rights.

In Greece workers are facing a second round of severe austerity measures that are slated to cut more than $9 billion from their services, adding to massive unemployment and poverty.

The big business media has falsely portrayed the plight of the workers in Greece as their fault for “living beyond their means.” This cruel distortion is meant to justify the resultant poverty that the Greek people will be forced to endure and justify the robbery by the banks and the IMF.

The struggle against austerity measures has ignited the mass of people in Greece.

PAME, the All Workers Militant Front, led a successful general strike on June 15. Tens of thousands of people filled Syntagma Square in Athens outside the Parliament, and thousands of workers marched in cities across Greece. Youth and workers held their line despite attacks from riot police, who fired volleys of tear gas canisters into the crowds.

On BBC World News a medical doctor participating in the protests alongside workers and students in the square pointed out: “People will die from these measures. Many will no longer be able to get medical care.”

General Secretary Aleka Papariga of the Communist Party of Greece (KKE), also a member of the Greek parliament, put austerity measures in perspective when she declared, “The people must with their own hands take back what they are owed and what belongs to them. [The capitalists] owe the people because of the surplus value they steal in the process of production.” (www.kke.org)

The KKE has gone on the offensive, declaring that the working class should sever itself from the European Union, the IMF and the bankers and fight for power.

The question of power and where this crisis comes from is an important one for workers worldwide, particularly in the United States.

Whether you are a worker in Wisconsin or New York or Athens, Greece, you have nothing in common with the bankers or billionaires wherever they reside. If the present government, regardless of place or type, cannot protect and defend the people, then the issue of workers’ and people power should be placed firmly on the agenda.

The deficit is a fraud. The underlying issue is how the wealth created by the working class is distributed and the inherent contradiction of how production is organized under capitalism, creating a crisis of “overproduction” and resulting in structural and permanent unemployment.

In reality the people of Greece and the United States are fighting the same enemy: the global capitalist system.

In a June 18 article called “Euro Jitters Ricochet Across U.S.,” the Wall Street Journal showed how interconnected the capitalist economy is, with some small towns and major cities in the U.S. already feeling the reverberation of what is happening in Greece through sharp increases in interest on municipal bonds (especially those funded by the Dexia company), resulting in layoffs and cuts.

“‘We are far from Wall Street or Greece, but the impact is being absorbed to the core in small-town America,’ said Kate Reardon, a spokeswoman for Everett, Wash., a city of 104,000 people, where interest costs are rising on a local rink and concert arena. In the Perris Union High School District in Perris, Calif., which already was furloughing workers and considering pay cuts, borrowing costs have risen by $30,000 a month, or about two-thirds of the cost of a first-year teacher, who earns about $46,700.”

The Greek Parliament is poised to pass more austerity measures on June 28 to satisfy the demands of the European finance ministers and the IMF, so the banks and the rich can receive the next installment of a bailout package due on July 2.

In response, PAME called for a 48-hour general strike, along with resistance to the cuts. Given recent events, tremendous resistance is expected. Regardless of the outcome, it will be an important chapter in the ongoing history of the workers’ struggle in Greece.

And there will be tremendous lessons for workers here in the U.S. The Greek struggle has rightfully placed on the agenda the question of whose crisis this is and who holds the power. PAME noted in its statement: “We call on the working people, the youth, the unemployed and the women to a carry out a people’s uprising. We struggle along with the peoples all over the world against the capitalist barbarity.” (inter.kke.gr)

Workers in Greece are resisting the same capitalist bankers and bosses who are threatening workers here and ultimately endangering the planet. The capitalist system is global. In May 2010 the KKE knew they were facing the combined strength of the European bankers when they hung a banner on the Acropolis ruins in Athens that read: “Peoples of Europe, rise up.”

On June 30 in Britain 750,000 teachers, lecturers and civil servant are set to strike over pension cutbacks. The call on the Greek banner should also be heard in the United States. International solidarity is needed more than ever for the people of the world to prevail.
Articles copyright 1995-2011 Workers World. Verbatim copying and distribution of this entire article is permitted in any medium without royalty provided this notice is preserved.
at 4:42 PM