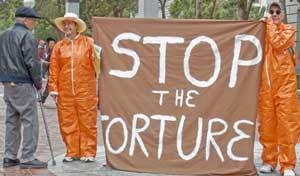 Urgent bulletin Editor’s note: On July 13 it is reported by the Prisoner Hunger Strike Solidarity coalition that 200 of the Pelican Bay hunger strikers are experiencing life-threatening health conditions according to an urgent update received by the coalition from medical personnel at the prison. The California Dept. of Corrections and Rehabilitation continues to refuse to negotiate. It is urged that phone calls be made to the following authorities immediately, demanding they enter into negotiations before they have (more) deaths on their hands: Gov. Jerry Brown: 916-445-2841, fax 916-316-0558; CDCR Secretary Matthew Cate: 916-323-6001; Pelican Bay State Prison Warden Greg Lewis: 707-465-1000 x 9040; and Ombudsman Ralyn Conner: 916-324-6123. See prisonerhungerstrikesolidarity.wordpress.com for updates.

The voices of thousands of California prisoners — those who have been locked away in “security housing unit” (SHU) prisons — were heard loud and clear in downtown San Francisco on July 9. More than 150 former prisoners and allies rallied to support the just struggle of prisoners at Pelican Bay State Prison who continue their hunger strike into a second week.


“Picture yourself in a 6-by-10-foot cell, probably ugly drab green, spending 23 hours of your day locked down with no human contact,” began rally chair Linda Evans, former political prisoner and member of All of Us or None, who spent over 16 years incarcerated in U.S. prisons. “Today we need to show unity ... throughout our community,” Evans declared.

Some activists dressed in bright orange jumpsuits with “CDCR” (California Department of Corrections and Rehabilitation) on the back to bring home one of the realities of being locked up in California’s prisons. The banner they held up — “Stop the Torture” — brought home the truth about SHUs, also known as supermax prisons.

PBSP is a maximum security prison located in Del Norte County, along California’s northernmost border with Oregon. The prison, which opened in 1989, has been the object of many lawsuits, including Madrid v. Gomez, a class action which exposed and challenged the torture and inhuman treatment of prisoners incarcerated there.

On July 1, hundreds of prisoners at PBSP went on hunger strike to win five simple but key survival demands: SHU prisoners want an end to group punishment and administrative abuse; the abolition of the “debriefing” policy and modification of active/inactive gang status criteria; CDCR to comply with recommendations regarding long-term solitary confinement; the provision of adequate and nutritious food; and the expansion of programming, correspondence and other privileges for indefinite SHU-status prisoners.

Since the hunger strike began, prisoners at more than 11 other California prisons have joined the protest. Former prisoners and other supporters have also been on solidarity hunger strikes.

Jessica Escobar, a member of California Prison Focus, corresponds with several prisoners at PBSP and spoke out about the inhumane conditions that prisoners now endure: “There is nothing rehabilitating in torturing prisoners and keeping them in solitary confinement. This ... is unacceptable and we should ... demand more from the CDC officials. They must answer for this type of cruelty and the violence they create, ... demeaning and degrading [prisoners] as human beings, and breaking their spirits and that of their loved ones.”

According to Escobar, the vast majority of prisoners in the SHU are people of color and more than half are Latino. The SHU is used to lock down prisoner organizers, non-conformers, political prisoners and prisoners who are “alleged” to have gang affiliations.

Once inside the SHU, the prisoner is faced with “debriefing,” that is, either snitching and giving the CDCR more names of prisoners to lock up or not cooperating and then spending years in SHU confinement. Many prisoners have chosen not to debrief and have been locked down in these cement cages for decades. Hugo Pinell, one of the San Quentin Six, has been locked down in the SHU for more than 40 years.

Barbara Becnel, a local author and filmmaker, spoke as a member of the prisoners’ selected mediation committee with the CDCR. The committee has been meeting on and off over the past 11 days with prison officials to press the five demands. “I have the greatest respect for the men at Pelican Bay who are doing what they are doing,” Becnel stated.

Becnel explained why the PBSP prisoners, as well as thousands of other California prisoners, are continuing with their hunger strike: “Why would someone opt to starve to death? The prisoners say they are slowly dying anyway from the torture. They are willing to go until they are dead.

“We need to muster up at least a fraction of the courage that these prisoners have showed. Please make calls to the CDCR, sign the online petition, send the faxes and put pressure on them,” Becnel urged. “We are going to have to raise a lot of ruckus to get the CDCR to meet the demands of the prisoners.”

Manuel LaFontaine, a former prisoner and organizer with All of Us or None, has been on hunger strike in solidarity with Pelican Bay prisoners since June 30. “We have our own Guantanamo Bay prison here in California, several of them — Pelican Bay, Corcoran, Tehachapi and Valley State Prison for Women. The reality behind the CDCR image is torture,” LaFontaine told the protest.

For more information about how to support the PBSP-SHU prisoners in their hunger strike, visit prisonerhungerstrikesolidarity.wordpress.com.
at 1:54 AM