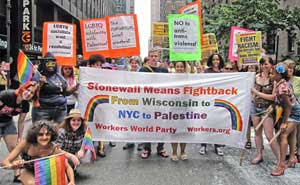 Just over 36 hours before marchers stepped off at 12 noon, same-sex marriage was legalized in the state of New York.

People had been celebrating since the bill passed Friday night. Now, on Sunday, the thrill of victory electrified the crowds at the annual march marking the 42nd anniversary of the Stonewall Rebellion.

Workers World joins the celebration. We salute the fighters whose struggle won this advance toward equality. And we demand full equality now: federal recognition of same-sex marriage rights, along with, finally, a federal civil rights law banning all discrimination against LGBTQ people.

It’s appropriate that this win coincided with Pride weekend — because it is indeed the mass struggle for four-plus decades that won marriage rights in New York. The LGBTQ movement, which started with that great rebellion against the police at the Stonewall Inn 42 years ago, has mobilized, protested, marched, sat in, stood up time and time again since then.

This mass action against oppression has achieved something remarkable. It has changed consciousness. So now, in a breathtaking shift that couldn’t have been predicted even a few short years ago, every public opinion poll shows that the majority of people in this country believe same-sex couples should have the right to marry.

This doesn’t mean inequality, discrimination and violence have been vanquished, especially not for LGBTQ people of color, trans people and youth. It doesn’t mean that the forces of reaction are ready to surrender. There is much more struggle ahead, and there will be setbacks along with victories.

But mass support for LGBTQ rights is a fact, creating popular pressure for change. It’s this pressure that drove the state of New York to legalize same-sex marriage.

No credit is due to New York Gov. Andrew Cuomo. No one should hail him as the hero of this story. Cuomo is a vicious union-busting, anti-worker, anti-poor, program-cutting reactionary. The way he maneuvered himself into position as the great man who handed the LGBTQ community this law is the most brazen display of demagoguery by any politician in a long time.

Cuomo signed the law right after forcing the state employee unions to accept a raft of terrible givebacks. He’s just cut budgets and raised tuition at the State University of New York and City University of New York, closing off access to the state and city university systems for many working-class students, especially immigrants and people of color. He is gutting social programs right and left, pushing the kind of racist assault against the working class and oppressed of New York that not even the last Republican governor could get away with. All this hurts LGBTQ people, who after all are, like most people, part of the working class.

Yet, lo and behold, he portrays himself as the great liberator. He is not. Cuomo may have signed the law. He may have carried out the parliamentary maneuvers necessary to get it passed — and, by the way, agreed to an outrageous series of exceptions permitting all manner of religious and quasi-religious entities to continue discriminating against same-sex couples. And he may even have wooed moneybags donors to fund the final lobbying efforts. None of this was decisive.

The struggle was decisive.

With each blow against inequality, the working class as a whole is strengthened. Now, in New York, there is one less tool with which the boss class can try to divide the workers and oppressed, one less artificial wedge blocking unity.

A matter of equal rights

The institution of heterosexual marriage is rooted in class society and based on the subjugation of women. Its original purpose was to codify paternity, ensure patrilineal inheritance and enforce male ownership of women. Marriage has traditionally functioned as part of women’s oppression.

But modern marriage is also a compendium of more than 1,000 legal rights and privileges. Same-sex couples are denied access to these rights and privileges. This is sheer discrimination. Thus, the fight to win marriage equality is a basic civil-rights issue. For this reason, and because it is part of the overall class struggle, every socialist should support this fight and applaud each gain along the way.

At the same time it should be understood that in New York and every state where marriage equality is won, the gain is largely symbolic. Symbolism certainly matters; just ask the joyous couples who were celebrating at Pride. Every battle, in every city and state, matters — especially the current court battle to throw out Proposition 8, which bars same-sex marriage in California.

But more than 35 states currently ban same-sex marriage. Nationally, the Defense of Marriage Act, signed by President Bill Clinton in 1996, bars any rights for same-sex couples even if they are legally married. All this must be overturned on the federal level.

It will take continued struggle to win change nationally. Most national politicians, from the White House to the Congress, remain unwilling to take a stand for full rights. At a June 23 LGBT Democratic Party fundraiser in New York City, President Barack Obama offered vague generalities about his ostensible support for LGBT rights but refused to endorse marriage equality.

A state-by-state strategy cannot win full rights. This is a national fight, and ultimately it’s a national movement that will win all rights on the federal level.

There are important lessons to be drawn from the African-American Civil Rights Movement of the 1950s and 60s. There were struggles in many locations, each vitally important — but it was the Civil Rights Act of 1964 that was the decisive victory.

As for marriage, at a time when many states still barred so-called miscegenation — marriage between Black and white people — it was the U.S. Supreme Court’s 1967 Loving vs. Virginia ruling that struck down those racist laws once and for all. In a June 2007 statement marking the 40th anniversary of that decision, Mildred Loving herself came out in support of same-sex marriage, a year before she died.

Now, as we pause to savor the sweetness of winning same-sex marriage in New York and congratulate all who choose to claim this new right, let’s also look forward to the next stage in the struggle. Let’s fight on to win full federal rights for LGBTQ people.
at 9:26 PM