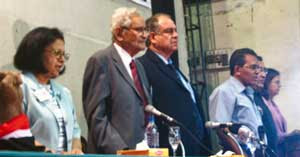 June 18 — The Egyptian Socialist Party was founded here today before a packed auditorium of more than 400 Egyptians and international guests. What made such an assembly possible was the enormous mass revolution of last Jan. 25 that removed the U.S.-backed dictator Hosni Mubarak and made the name “Tahrir Square” an inspiration for popular revolt worldwide.

Composed of Marxists and non-Marxists, the party is centered around a perspective that capitalism has plundered Egypt and impoverished its people, and that the only way to develop Egypt and raise the standard of living is through socialist economic measures.

Speakers affirmed the Arab character of Egypt, their support for a Palestinian state, the opening of the Rafah border with Gaza, and opposition to Zionism and imperialism.

The party described the impoverishment of two-thirds of Egypt’s people as the root cause of the mass Jan. 25 Revolution that deposed Mubarak, who had ruled Egypt for more than 30 years. The Egyptian Socialist Party sees itself as a continuation of that revolution because it seeks to address and rectify the poverty and to fight against repression and for democratic rights. Members referred to the fertile grounds for socialist ideology in Egypt at this moment.

The new party emphasized that it was part of a “socialist front” with like-minded left parties that would fight together on common issues and defend the Jan. 25 Revolution. The other four parties are the Popular Democratic Alliance — made up of a majority of the former “loyal-left” Tagammu party — the Democratic Labor Party, the Socialist Revolutionary Party and the Egyptian Communist Party.

The Egyptian Socialist Party sees itself as part of a long history of Egyptian socialists fighting for the rights of the poor and challenging colonialism and neocolonialism since the 1920s.

Among the economic measures that the party advocates right now are decreasing the disparity between urban and rural areas, since 87 percent — seven of every eight — of Egypt’s poorest people live in rural areas; and affirming the right of workers and the unemployed to freely form independent, democratic unions without interference from the state and winning unions with nothing more than notification of the workers’ intent.

Among other economic demands are tying wages to prices to maintain support related to an increase in commodity prices; canceling temporary hires for permanent jobs; and gaining popular participation in the oversight of the markets and the distribution of bread. (For more details, see The Egyptian Socialist Party Political Perspective at www.tinyurl.com/egyptsocialism

The party recognized the leadership role that Egyptian women have played in the trade unions and the role they played in the Jan. 25 Revolution. Speakers pointed out that economic deterioration and rising prices in Egypt over the last decade have made women the country’s most vulnerable group, with little access to education.

Ahmed Bahaa raised a burning issue at the moment for the Egyptian left — keeping Egypt a secular country. He said the Egyptian Socialist Party opposes a constitutional amendment declaring Egypt an Islamic country. At the same time, Bahaa said, the party “perceives Christianity, Islam and Judaism as part of the Egyptian spirit, and we extend our hand to enlightened religious leaders who share the same ground as us.” His words were followed by a chant raised from the audience of “Moslems and Christians are joining hands!”

Bahaa explained that new rules for new parties to run in the upcoming September elections are meant to “ensure new parties are only for the rich,” and that they “restrict those who would build a new system in Egypt and challenge those with money.”

To be on the ballot, new parties must have 5,000 registered members, and then take out prohibitively expensive ads in the two major Egyptian daily newspapers listing all 5,000 names.

According to Mamdouh el Habashi, the new party’s immediate plans include consolidating its line and reaching out to people in other parts of Egypt as well as to those in Cairo. (Most of the participants at the meeting were from the Cairo area, but there were also some from the countryside and other industrial cities.) While the party will not officially be on the ballot, el Habashi said they plan to run candidates in the upcoming elections in order to make their program known.

From the Arab world, solidarity statements to the Egyptian Socialist Party were delivered from the Popular Front for the Liberation of Palestine and the Iraqi Communist Party. Solidarity speakers from Europe included Johanna Bussemer, a member of the European Parliament representing Die Linke (the Left Party) in Germany, and Len Leroy from the French Communist Party.

From the U.S., this reporter delivered a solidarity statement from Workers World Party and the International Action Center.

Other international guests included representatives from the Spanish Communist Party, the French Left Party, the Red-Green Alliance of Denmark, and the Korean Democratic Workers Party (south Korea).
Articles copyright 1995-2011 Workers World. Verbatim copying and distribution of this entire article is permitted in any medium without royalty provided this notice is preserved.
at 2:28 AM