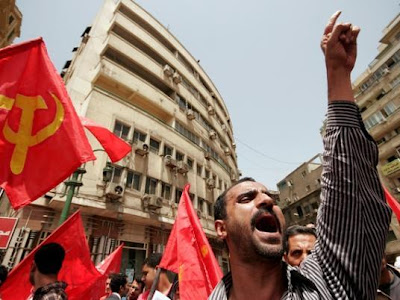 
The Egyptian Communist Party suggested Thursday the formation of a unified body of revolutionary forces responsible for managing demonstrations.

The party said in a statement the body would “take decisions collectively and coordinate with revolutionary forces, as well as agree on a road map to specify objectives, forms and appropriate methods of protest.”

The party's idea for protest oversight comes as an ongoing sit-in in Tahrir Square has drawn the ire of some of the public as it has paralyzed Cairo's main square since 8 July.

The party's statement statement emphasized the need to continue all forms of peaceful struggle to achieve the revolution's demands, but said it is not possible to achieve all the demands simultaneously.

Islamic forces including Salafis and the Muslim Brotherhood said they will stage a protest in support of the military council’s efforts to maintain stability during the transition phase.

The statement said the Communist Party aims to reach consensus with other parties regarding principles that will guide the constituent body responsible for drafting a new constitution.

Translated from the Arabic Edition
at 2:08 AM